Xu Kai is the new IT Boy with lots of resources! To Land Zhou Dong Yu in one hand and Yang Mi in the other shortly after. I need to watch one of his projects to see for myself.

END_OF_DOCUMENT_TOKEN_TO_BE_REPLACED 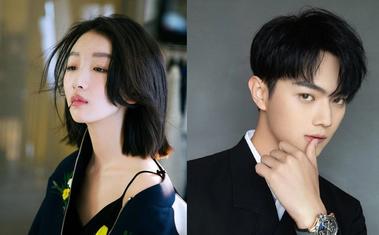 Yay! A cute pairing! Ancient Love Poetry is adapted from the novel Shang Gu (上古) written by Xing Ling and the production team has recently confirmed the leads in Zhou Dong Yu and Xu Kai. The story follows one of the four Immortals named Shang Gu who falls into a deep slumber after sacrificing herself in a trial 60,000 years ago. She wakes up with no memories of the past. But someone else hasn’t forgotten about their love, another immortal who waited for her, our male lead played by Xu Kai. Their epic love story undergoes several rounds of life and death (you don’t say). This is the generic synopsis from Baidu…. I’m distracted by the nice weather as I failed to read a little bit about the novel. Has anyone read this novel and can spill some beans? Lol.

END_OF_DOCUMENT_TOKEN_TO_BE_REPLACED

Sorry for the lack of updates, the past week had been hard. T_T

END_OF_DOCUMENT_TOKEN_TO_BE_REPLACED Animal World (动物世界) reunites the OTP from “Sparrow”, Li Yi Feng and Zhou Dong Yu, and also features Michael Douglas (Ant-Man) as a mysterious loan shark. Based on a Japanese manga called Kaiji: The Ultimate Gambler, this movie is a live action version of part 1 of the manga about a man forced to participate in a bizarre betting game on board a ship to get out of debt. Despite the frenetic trailers and what appears to be some visual influences from Deadpool, it’s actually more of a drama about how money or a lack of it can challenge people’s morals and motivations.

END_OF_DOCUMENT_TOKEN_TO_BE_REPLACED

Sigh, how come Monday to friday takes so long but Friday to Monday goes by in a flash? My weekend is over and all I did was sleep. Lol. What’s worst is I also lose one hour today! BAHHHHH. But anyway, I digress from the main topic at hand, which is Zhou Dong Yu and Lu Han being rumored for the upcoming film adaptation of Jiu Yue Xi’s novel The Youthful You Who Was So Beautiful. It’s described as a dark novel with bullying as the center theme, how teens react to bullying and ignore the bullied. Our stuttered female lead witnesses the bullying of a popular classmate and clams up in fear of being the next target. The bullied girl decides to commit suicide and the investigation forces our heroine to re-evaluate her stance in the vicious cycle and she builds up the courage to expose the truth. However, with courage comes the wrath of the bullies and our female lead seeks the protection from another brave youngster – our male lead. I can see Zhou Dong Yu nailing her role but pretty Lu Han as the protector is an interesting visual…. he’s just too pretty! xD The production is from the same team behind the successful movie Soul Mate which earned both Zhou Dong Yu and Sandra Ma the title of Best Actress at the 53rd Golden Horse Film Awards. Solid work credits!