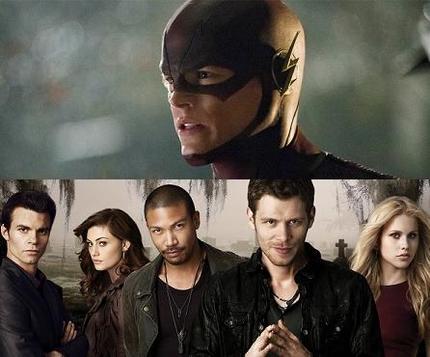 These two American Tv Shows (along with The Big Bang Theory) are the only shows that I follow from week to week. If only an Asian drama could get me this excited on a weekly basis (still waiting for my crack.) These two shows are not without faults, but I enjoy them immensely despite one being cheesy (The Flash) and the other being dysfunctional (The Originals). What does that tell you? I love cheesy and crazy relationships! 😀

Will be adding my thoughts to the comment section as new episodes air so join me with your opinions!

As always, you can find these discussion posts on the upright tab according to the year.

The Flash: an American television series developed by writer/producers Greg Berlanti, Andrew Kreisberg and Geoff Johns, airing on The CW. It is based on the DC Comics character Barry Allen / Flash, a costumed superhero crime-fighter with the power to move at superhuman speeds, who was created by Robert Kanigher, John Broome and Carmine Infantino. [Wiki]

The Originals: A spin-off from The Vampire Diaries which centers around the Mikaelson siblings, Klaus (Joseph Morgan), Elijah (Daniel Gillies), and Rebekah (Claire Holt). The backdoor pilot, which aired on April 25, 2013, also revealed that the werewolf Hayley (Phoebe Tonkin) is pregnant with Klaus’ child and would therefore join the cast. The show begins with the original siblings returning to the city of New Orleans for the first time since 1919. Having originally built the city, they had been forced to flee from their vengeful father. In their absence, Klaus’ protégé, Marcel (Charles Michael Davis), took charge of the city. Klaus resolves that they must take down Marcel and get back the city that once belonged to them. While doing that they must also protect everything that they have built from the war brewing between the vampires, werewolves and the witches. [Wiki]

The Original airs every Mondays night, and The Flash airs every Tuesdays Night. Spazz away!