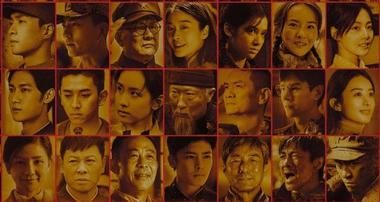 Faith Makes Great (理想照耀中国) is an upcoming drama celebrating 100 years of the Communist Party of China, recording the unity and leadership of the Chinese people throughout the years. It consists of 40 mini stories, each one runs for 1 episode, totaling over 100 actors and actresses and 3000+ production crew members.

END_OF_DOCUMENT_TOKEN_TO_BE_REPLACED

A lot of Youku dramas showcased their trailers at the annual press conference!

END_OF_DOCUMENT_TOKEN_TO_BE_REPLACED

My fangirl heart is bursting! Li Ying looks amazing in these pictures! The sleek ponytail might be my favorite look of hers. If you didn’t know already, Li Ying is the voice actress (China Region) for the heroine in Disney’s film, Raya and the Last Dragon (寻龙传说), which came out last friday 3/5! The script is penned by Vietnamese American writer Qui Nguyen and the Chinese Malaysian writer Adele Lim. I have yet to watch it but we are planning on a live-watch party on our Discord soon!

END_OF_DOCUMENT_TOKEN_TO_BE_REPLACED

Fei has come to an end. This is a quick and dirty summary of the last three episodes for those interested! Sorry if there are mistakes, I wrote it after a long shift with crossed eyes. XD Depending on time, I might write a separate post for my thoughts on the series as a whole (the good, the bad, and the ugly).

END_OF_DOCUMENT_TOKEN_TO_BE_REPLACED

On the one hand, I desperately want to see this drama because I love Li Ying in ancient costumes and the wuxia aspect of it; but on the other hand, I don’t want it to air, afraid that it might be a while before I see her in action again. The rumored air date floating around the net is 12/18 BUT it hasn’t been confirmed yet so don’t get too excited.

The team dropped a new behind-the-scene video a few days ago and followed that with a new batch of stills today.

END_OF_DOCUMENT_TOKEN_TO_BE_REPLACED

Another station reveals the goodies in their bag!

END_OF_DOCUMENT_TOKEN_TO_BE_REPLACED

Here’s a long compilation of teasers and trailers released at various events this past week such as the iQiYi iJoy and Tencent video conference. Sorry, I can’t physically make 20+ separate posts for each of them. I think I have written about the majority before so it’s nothing new. Just a peek from different online platforms for what’s coming up next for them.

Which ones are you looking forward to?