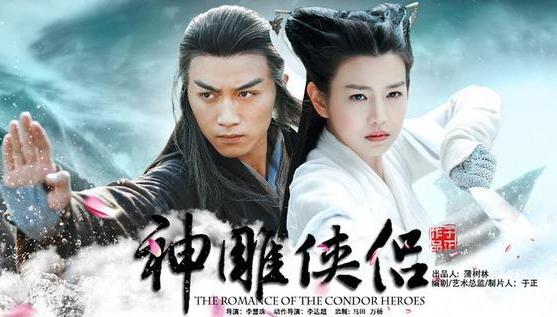 Let’s make the discussion corner a welcome tradition of AVV! I added the released soundtrack as a bonus.

Kappy: I love the melody of these songs, especially the themesong “Vastness” by Zhang Jie and “Sixteen Years” by Chen Xiao and Moraynia Liu. Chen Xiao sings two songs! His voice is somehow more masculine when singing, isn’t that weird? And Michelle’s voice is so sweet compared to her dubber. I think it’s a good thing they dubbed her. A playful XLN with sugary voice would be too much of today’s romcom leading heroine.

First four episodes reveal to us the Li Mo Chou (Viann Zhang) we rarely see in the past adaptations. She is to me, Dongfang Bubai VER 2.0. Despite what her teacher preaches, “Men are the root of all pains,” Mo Chou defies her furtively and goes out of the Tomb to enter the lively world. She meets with some jianghu swindlers and exposes their lies to the public. The enraged men try to kill her but they are the crazy ones. What sane men would confront a swords woman who flies and flips without a wire, when they CLEARLY don’t have the same ability? She kills most of them and their brothers seek revenge. More dies so they seek the help from Lu Zhan Yuan (Chen Xiang), the eldest son of the Lu family who is interested in engineering traps instead practicing Kungfu. He flirts with Mo Chou and explains to her that not all men are bad, they can protect women, blah blah blah, blah blah blah. In short, she likes him and almost falls for his trap but he has a change of conscience, after finding out that she’s not so bad. She only wants to kill. How cute. /sarcasm

The revengy brothers kidnap Zhan Yuan but Mo Chou comes to his rescue because his betrayal is insignigicant compared to her aching heart seeing him hurt. They fall down the cliff into the convenient located river below. She asks him to stay with her and in the heat of the moment, they make-out furiously like a modern couple. He will marry her if she promises not to kill people so carelessly. “YES.” Now that he’s involved with jianghu’s latest monsters (they did not get married), everyone wants them dead, leading Mo Chou to push him about brushing up his Kung fu skills. He listens and gives up on changing her when she brings someone as prey for him to practice. You know, for someone who has lived the majority of her life in a tomb, Mo Chou is pretty sexually aware, what’s with the puckering of the lips? Has someone been reading naughty ancient novels in the tomb? 😛

Drunk and dejected about the said woman at home, Zhan Yuan stumbles outside the streets and bumps into Miss Nosy, aka He Yuan Jun (Deng Sha), a servant from pretty rich family. This happy-go-lucky Missy wants to soothe the sorrowful wrinkles from his face and suggests he help her pick some herbs as a form of compensation for dropping her herbs earlier. He agrees and is shortly smitten by her kindness and optimism. However, the next day, Yuan Jun’s captured by Mo Chou to be his prey for another round of Kungfu practice, but of course, Mo Chou promises not to kill the pretty girl. After Mo Chou is gone, Yuan Jun suggests they elope. WHAT? Gurl, you just met him, what’s with all these lovey dovey till-death-do-us-part crap talk? They set a farce so that Mo Chou allows Yuan Jun to leave holding Zhan Yuan as a hostage. Oh, the betrayal. The traitors spend the rainy night together and Zhan Yuan promises to marry Miss Nosy and never hurt her feelings. Except he has hurt someone else’s heart. Do you not see his capricious nature, ladies?

Next morning, they are found by Mo Chou and Zhan Yuan shoots her in the back (OH HO HO, the symbolism!) when she tries to kill Yuan Jun. He swears to heavens that Yuan Jun is the only person he loves. Keep rubbing salt in her face, treacherous boy. Mo Chou is understanding, she would let you BOTH live. Lol. In comes one of the Five Great martial artists during this period, Monk Yi Deng, and he saves the pair of lovers from Mo Chou’s wrath. Wow, so girly, he fights with flower petals. LOL. Accompanying him are his two students, the man, Wu San Tong (same person that Miss Nosy saved at the beginning), and the woman (his wife), Wu San Niang. His advise to Mo Chou is not bad. If in 10 years, she still finds this event/betrayal hurtful, she is welcome to kill the pair without his interference. It’s a good idea so Mo Chou tells Zhan Yuan to be mindful of his health, live well, and don’t die until her return. So reassuring to hear those words from your ex. 😀

Mo Chou returns to the Tomb Sect but her master denies entrance unless she swears to live the rest of her days in the tomb. She can’t! She still needs to kill the treacherous couple. Off she goes and little Dragon Girl steps outside and watches her senior sister leave. She narrates, “This is the last time I saw my senior sister as a child. I half-understand what my master said about men when I look at my senior sister’s sorrowful face.” She kneels down and promises that she won’t be like senior sister and leave the tomb. EVER. Ha. Kiddie and their promises.

10 years later. We revisit Li Mo Chou as she wreaks havoc on a street when the “Yuan” character is written on their boats and flags. It reminds her of Miss Nosy, He Yuan Jun. Hearing the news of her master’s death, she hurries back to the tomb on the excuse to give respect but Little Dragon Girl refuses entrance. As she descends the steps, she meets Quanzhen Sect’s student, Zhen Zhi Bing (Song Yang). This name never fails to disgust me! He is sent by his master to ask the new Tomb Sect’s leader to clean up their own mess (Li Mo Chou) before they have to step in. He says it nicer, of course, and to Li Mo Chou’s face. Lol. She’s about to kill him when the entrance door opens and Little Dragon Girl flies out to stop the fight and defeats Li Mo Chou. Mo Chou is huffy puffy. Why is that she’s dispelled for liking a man while Little Dragon Girl can, in broad daylight, violates the Tomb’s rule by leaving the sacred building for the sake of a pretty boy? “You’re half a pound and I’m 8 ounces, so you might as well divide the Jade Maiden Sutra in half as well.” Haha. Flawless logic.

Li Mo Chou sends her student to kill the Lu family but the apprentice is interfered by Wu San Niang and we get to meet her two sons, known together as the Wu Brothers. Afterwards San Niang recalls her sob story with her husband. Woman, if you HAD to chain a man for him to bed and stay with you for 10 years, some screws are bound to come loose. Who would have thought, he still loves He Yuan Jun and runs off to find her. San Niang warns them that Li Mo Chou will come anytime soon.

Mo Chou gives her ex-lover another chance for survival, as long as he kills his wife and daughter. Only then will she forgive him. Just so that we’re clear, Miss Nosy’s daughter is the little girl in orange (Lu Wu Shuang), the other girl is her cousin, Cheng Ying. Of course, Zhan Yuan chooses to die with his wife and hangs Mo Chou’s handkerchief on the girls so that she might spare their lives. San Tong appears to save the pair of lovers, while his wife takes the kids away, which is when we first meet naughty Yang Guo (child actor: Wu Lei), pretending to be captured so that San Niang and the kids fall right into his mud trap. He wants money and since they refuse to hand it over, he decides he needs to peeeeeeeee. Lol. Good thing spoiled brat, Guo Fu, arrives and enlists the help from her mother’s birds (?), just to be reprimanded by Guo Jing’s master a minute later.

To be short, Lu Zhan Yuan and He Yuan Jun commit suicide. And San Niang dies after sucking the poison out of her husband’s arm. Poor woman. But I like her parting words, “You want to leave this world first? You want to be free from all the suffering and leave me to suffer in this world alone? No such deal. I’d rather die first! And be free of all this pain and hurt.” And this folks, is how the Wu brothers become students under Huang Rong.

In a bit, Li Mo Chou finds their hiding location and Guo Jing’s master fights with her. At some point, he becomes batman. With wings and all. Lol.

With Guo Jing’s master defeated, the kids are defenseless, and Yang Guo tries to be the hero by trapping Li Mo Chou in his “genius” creation. I love Mo Chou’s patronizing gesture at his feeble attempt to detain her. Well, he fails and runs off with Cheng Ying. Interesting. Don’t worry about the kids, they will survive because mama Huang Rong arrives and gives Mo Chou a make-over. In the chaos, Wu Shang is kidnapped by Mo Chou.

Survival is the number one priority on Yang Guo’s list and when he doesn’t have money for food, he takes Cheng Ying to a brothel and sells her off. Poor girl still thinks he’s a good person. As he walks away, he meets Ou Yang Feng, a top martial artist who has lost his mind and specializes in the Toad Skill. The two lonely souls share a bond and Yang Guo begins calling him father.

And such is the irony of life. Li Mo Chou escapes the Tomb Sect yearning for freedom and colors of the world, and yet she’s trapped in a much bigger cage and at the same time narrower mindset of hers.

Impression in one sentence: Yumama named this series accurately, romance is everywhere, most are inappropriate and unconvincing.