How about some news compilation? =D

Lol. Gina is sneaked in almost all Tangren productions. XD

=======> ♦ War drama, Shao Shuai (Young Marshal 少帅), based on a real ruler (Zhang Xue Liang) of Northeast China in history releases new trailer and some posters. Is it me but the preview looks strangely sweet and romantic…and watchable?!!

=======> ♦ A few quick stills of Gulnazar in drama First Love. She stars alongside of Hawick Lau and Sun Yi Zhou.

=======> ♦ Ying Er started a new drama, Best Arrangement (最好的安排) with Fu Xin Bo. Looks like she plays some kind of nun as seen in the captured photo below. More details to follow.

=======> ♦ Hu Ge and Wallace Huo are shooting a Valentine-themed photoshoot for Bazaar in Hokkaido. Well, that explains where the two were. The name of magazine issue is Winter Love Song. Lol. BTS photos have been floating around the net so I won’t repeat. Have a quickie: 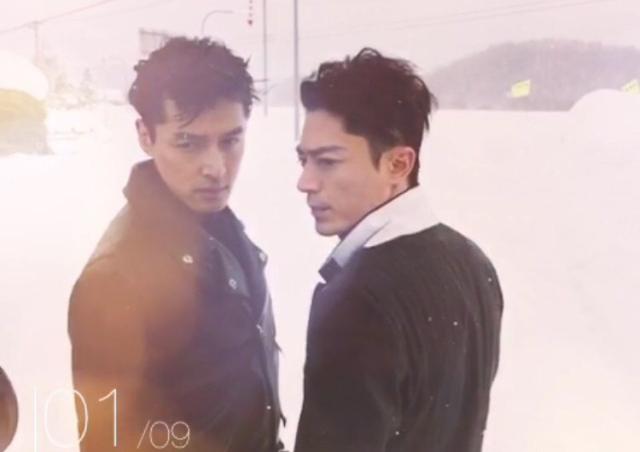 =======> ♦ After many months, Yang Rong cannot escape Yumama’s grasp and has really signed on to play the female lead of Ding Mo‘s Memory Lost.

=======> ♦ Hua Qian Gu and Sha Jie Jie‘s supposedly kid, Zheng Ye Cheng, is headlining a new live-adaptation of an anime called Wang Pai Yu Shi with an English title of Ace Censorate (王牌御史) directed by Rocky Jo. He leads a group of adolescents in a fight against monsters and all things evil. Oh, the irony.

=======> ♦ On the first of January, our little Leo Wu Lei has started a new fantasy wuxia drama (奇星记之鲜衣怒马少年时). He and Chen Xiang will be leads. Chen Xiang will join the production later because he’s shooting The Adventure For Love. More details to follow.

=======> ♦ Jiang Jin Fu‘s name is attached to another novel-to-drama adaptation called Back to the Ming Dynasty as a Wang Ye (回到明朝当王爷). A story with time-traveling. A man with no intelligence or martial arts skills is given a chance by Yama to live for another three years after saving someone. Using his wits, he somehow gets reincarnated into the body of a poor Ming Scholar and through many difficulties, become a Wang Ye (Prince but not necessary of royal birth).

=======> ♦ After completing his scenes in 15 Years of Waiting for Migratory Birds, Zhang Ruo Yun will join the production of Novaland: The Castle in the Sky (九州天空城) with leading actress, Traey Miley aka Guan Xiao Tong (her English name…) Filming begins on the 20th of January for other cast members.

=======> ♦ Variety show We Are In Love Season 2 is awake from its slumber! Names are being thrown around. Of course, our girl is rumored to participate. Tsk tskkk…

=======> ♦ Ma Tian Yu is rumored to be in the running for another novel of the Ghost Blows Out the Candle Franchise. It’s called Ghost Blows 2: Huang Pi Zi Fen (鬼吹灯Ⅱ之一黄皮子坟).

=======> ♦ A string of news for Zhao Li Ying below: New Eternal Wave releases a BTS video of the cast. Zhao Li Ying‘s character is seen in a glamorous pink fur coat and smoking on set. Lol. Oh boy.

Zhao Li Ying as the new spokesperson for Shiseido’s line, Pure&Mild. Uhh… They could be more creative. Why is it so bland? Lol.

A music video of her upcoming movie, The Ultimate Challenge. It is really the guys movie and song but we have brief scenes of her. Movie is out on the 15th!