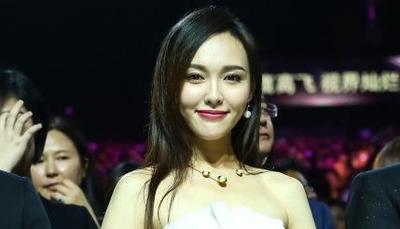 The star power this year seems less than previous years. That just means this small group of attendees get more attention on them. Not bad. Not bad at all. ;]

She won the Audience Favorite Actress award along with Tong Li Ya.

Love this shade of blue on Tong Li Ya!

Hu Ge and Liu Tao. I love her first dress. It’s black but under the lights below, it looks like a deep blue. Perfect.

They won the Most Popular Actor awards. So Hu Ge has two.

You looking for me?

Ming Dao walked out with model Xi Meng Yao. She’s so tall and she’s in flats!

Yang Yang opens the awards night with Tang Yan on his arms. Sorry Xiao Nai, Tang Yan has a glow to her tonight and my eyes keep swaying to that bright spot. She’s beautiful.

They always sit together. XD

Li Ying’s birthday celebration. Aww. The whole audience sang. I would be mortified since I’m not the spotlight type. Lol. They gave her a mountain of buns. XD

Professor He teasing Hu Ge and Li Ying. Basically, Hu Ge has become the nation’s Groomsman. Lol. Every time his friends get married, the whole nation rushes out to comfort the poor bachelor. However, He Jiong notices that whoever works with Hu Ge has the best of luck when it comes to work, love, and marriage and hence he’s very happy to see Zhao Li Ying sitting next to Hu Ge today. LOL. He’s always looking out for her. hahhaa. But Hu Ge raises his hand to clarify that since Li Ying is here today for Hua Qian Gu, Wallace Huo should be in this seat instead. Since he couldn’t make it, he’s taking up the chair for him.

Performances from Previous Nights of the Festival.

Wei Da Xun. “My Everything.”

Zhang Han and pretty girls? I don’t recognize them. Lol. “I Miss You.”

Zhang Tian Ai and Shen Meng Chen. “Pineapple?” Anyone wants to tell what is going on? XD

Our stiff Jing Yu aka actor Cheng Yi from The Legend of Chusen has descended the mountains to Hunan stage. How dare he! I’m gonna tell his Shifu. LOL.