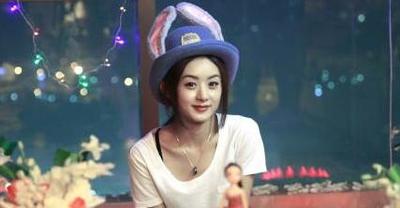 Our hard-working little bunny turns 29 today! She had a small party with her team before heading out later to attend the Golden Eagle Awards! I hope she picks a pretty gown! Get ready for picspams later. 😉

Some pictures posted by her assistant on weibo. They put thoughts into decorating the room! *cries*

Such a cute cake. How could one eat it?!

Our girl will get her own wax figure! I swear if they do one of Hua Qian Gu, I’m gonna pop a blood vessel. Lol.

Shawn and his bouquet of flower!! SWOONNNNNNNNNNN!! He changes the name of the drama to Little Bunny Story. Lol. Shawn: “Zhao Xiao Dao, Happy Birthday!” Niu Jun Feng is so cute, he says it’s her birthday today? The script doesn’t say that. Lol! Lin Geng Xin shares a picture of her holding the Eagle trophy saying Xing Er (one of her names in the drama) is so good and it’s the best birthday present ever! Another message he shares is a picture on Princess Agents set with Li Ying holding a bunny lantern. He says, “My (he refers to himself as Young Master) present has arrived, please take it.” Shi Xiong from Hua Qian Gu introduces himself as such. heh. All the wishes from the younger actors! All of them wish her great health and never-aging beauty. Li Qin has a voice message wishing her good health and happiness. “Chu Qiao Da Ren, we all love you.” Aww.

Shawn and Jun Feng have completed filming for their scenes. NOOOOOOOOOOO. The drama will wrap up very soon.