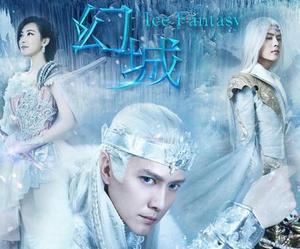 Falling behind slowly as we speak… I really like how these stills came out but the question remains how they are gonna look in motion.

Drama adaptation of Guo Jing Ming’s novel Ice Fantasy finally reveals Victoria Song‘s stills. In the novel, the older brother (William) loves two women and both are killed by someone… Lol. No spoilers. Of course, they are gonna change that.

The brothers frolicking in the snow. William Feng and Ma Tian Yu.

Alina Zhang. Only Princess from the Fire Tribe. A little something something going on with our bad boy little bro!

Hu Bing. King of Fire Tribe. Lol, the brothers are gonna look frail and tiny next to his frame.

Gong Bei Bi. I’m in love with how she looks. And the intricate lace design on her chest! Beautiful!

Now moving on to Guo Jing Ming’s other production (a movie) for which he is the director, L.O.R.D: Legend of Ravaging Dynasties about the battles between four kingdoms to gain ultimate domination. We didn’t receive the first batch very kindly but here is the first “concept” art look after they went through the molding. I swear with all the feathers going on, they could pass for the demon bird tribe.

Kris Wu could use a little bit more meat.

They give William Chan lots of muscles! XD

And I just had to upload this video of the supporting cast in Ice Fantasy being geeky and nostalgic. The moment I heard the song, I almost burst into tears. My childhood. I love these kids already. 😉 Adorable!