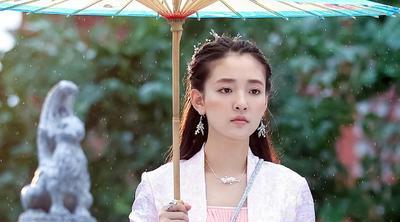 It’s been a while that I like everything from hair to clothes of a drama production. The young cast members look really well-put together and I’m glad their stylists love them all equally. Lol. Upcoming novel-to-drama adaptation of Mao Ni’s Fighter of the Destiny (择天记) have a share-day at work and interviews are done with the cast. I haven’t personally watch it yet so I’ll include the videos at the end for those interested.

Copying and pasting my translation from before:

Lu Han as Chen Chang Sheng. Abandoned in a flowing river and plucked up by a Taoist monk. He’s actually the fourth Prince of the Chen’s Royal bloodline. He’s plagued with an incurable illness, fated not to live past the age of 20. To find a cure, he leaves his temple, armed with a promise of marriage scroll, to become a student at a famous academy. He meets Xu You Rong and they slowly fall in love after hopping though the trials and tribulations of his journey.

Gulnazar as the female lead, Xu You Rong. A gifted child in the practice of a special magical language? Sorry I lost it at this point, all the magical voodoo vocab. She likes archery and hates nuisance.

Janice Wu as Luo Luo. Princess of adorableness. After being saved once by the male lead, she calls him Shifu and follows him into the academy.

Lu Han’s fans have already subbed some videos so check the videos out!