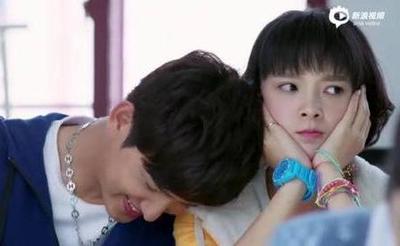 OTP. Female lead is given to Sebrina Chen Yao (Wu Xin The Monster Killer). As Zheng Wei, she’ll be following her childhood sweetheart into college only to find out through his roommate that he left for America, leaving her heartbroken and clueless over the reason why. Male lead goes to Yang Le (My Sunshine), the intelligent but antisocial architecture student at the same school. He’s very stern and believes that his life, like a building, can only be built once, so he can’t afford mistakes for its foundation. After graduation, he receives a fellowship to study architecture in America and chooses to secure his future, leaving Zheng Wei behind. Poor Girl. Lost her men to America twice!

The third leg, Lin Jing, played by Zhang Dan Feng. Looking spiffy in all stills. The man who left our female lead for America in the beginning. When they meet again years later as mature adults, he wants to rekindle with her…

Ma Ke as Xu Kai Yang. A well-off kid who pursues Zheng Wei but she doesn’t look his way. His best friend is played by co-star from The Journey of Flower, Dong Chun Hui. They look so cute together. Ha!

Who are we stalking, boys?

With Tomboy Xu Yue from The Age of Heroes.

The female lead has three room mates. I’m hopeful that they will do the sisterhood right! PLEASE!

Elvira Cai (The Interns) as the Most beautiful and popular girl.

Girl with the side braid rounds our the roommate club, practical and materialistic one, CiCi Xia Tian from Princess Jie You.

Directed by Yang Wen Jun (Divorce Lawyers, Movie My Sunshine) and edited by Sun Qi and Yuan Si Da, So Young has 30 episodes.