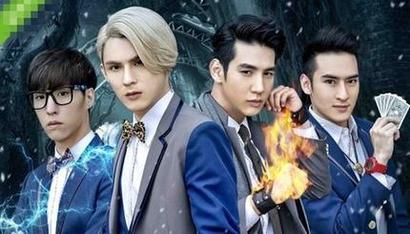 Hmm, if none of the 10+ airing dramas this month grab your attention, check this one out, but I can’t guarantee the acting is solid. Lol. It’s an idol drama based on a novel of the same name by Yu Jia. I mentioned The Four Horsemen way back in March and it is finally broadcasting on Qiyi on July 28th, led by Taiwanese actor Andy Chen and a truckload of fresh faces, especially the pretty girls!

A refresh on the plot: It’s a modern fantasy drama revolving around a prestigious college known as Roland Academy. A mysterious letter was sent to its previous elite graduates, declaring a danger of unknown force threatening to destroy the school. To prevent such happening, the alumni send their only son to attend Roland’s incoming class and investigate the mystery.

Good thing is the boys each has his own love interest. Whew~

Huang Ren De (or Hwang In Duk). You might remember him from Itazura na Kiss 2 ~ Love in TOKYO, Fabulous Boys, and KO One Return. He plays Duo Yuan Zhi, prince of the Zhuo Guan Gang.

Snoopy Yu Jin (Lovestore at the Corner, Dragon Gate) as Yu Wen Si, son of a the school’s CEO. I know…his english name…