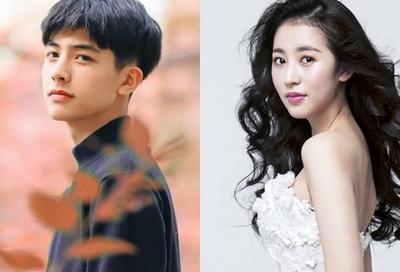 Remember the highly rated Korean series You Who Come From Another Star with Kim Hubby and Jeon Ji Hyun in 2013? And then do you remember the plagiarism lawsuit that transpired for a little bit before settling out-of-court? Yep. The new Chinese Fantasy drama, Snow Girl (雪姬), is based on a Korean comic book called Seol Hee, written by Kang Kyung Ok. It stars Yumama’s new pretty boy, Song Wei Long (Demon Girl) and Zhou Yu Tong (Heroin, Love Weave Through A Millennium). The only difference in story: Our heroine is the person who’s injured and subsequently received treatment from an alien and gains eternal youth. And just like that she lives on earth for 400 years before meeting a man wearing the same face as the alien who saved her.

Song Wei Long. I haven’t watched to his part yet in Demon Girl so no idea about his acting.

Zhou Yu Tong. She’s also the female lead in Ma Ke’s The Journey, the vampire drama that I completely pushed out of my head. Lol. I need to get back to that…

The production company in charge is relatively new in producing dramas. If you play mobile games, you might recognize the company Linekong, as they recently entered showbiz business and this one of their first web drama.