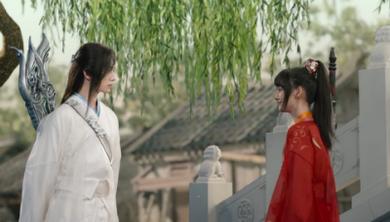 This first episode is a delight to watch and to recap. I think the show nailed the execution and improved the plot. The characters feel alive instead of caricatures of themselves, which the show owed it to the original writer Gu Man also being the scriptwriter. If you like the book, I think you will enjoy this adaptation.

Game world. Lu Wei Wei Wei and Zhen Shui Wu Xiang are the two remaining players battling a monster, and they manage to defeat it with well-coordinated teamwork. The monster drops a powerful item, which Lei Shen Ni Ni gets. Another player outside their group wants it too and challenges Wei Wei to battle for it. Wei Wei agrees to fight him on behalf of her friend and they promise on a time.

Later when they are alone, Zhen Shui gently chides Wei Wei for still calling him so unfamiliarly. Another couple passes by, who calls each other husband and wife, highlighting their awkwardness even though they have already been “married” for half a year. Zhen Shui wants more and asks if she is studying in D City. 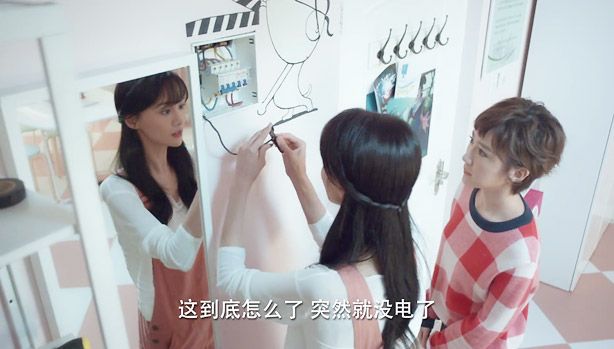 Switching to real life now, Bei Wei Wei (Zheng Shuang) is hesitant to exchange photos with Zhen Shui and denies his requests to meet for dinner. When she is about to reply, her laptop dies. Turns out her roommate Er Xi (Rachel Mao) fried the electrical circuit by cooking instant noodles. Wei Wei fixes it with expertise.

Problem solved, but the laptop won’t turn on. Er Xi sheepishly admits that she has oh so accidentally dropped the laptop when she borrowed it earlier. Wei Wei drags Er Xi out to get her laptop fixed. Er Xi complains that it is waste of a good day, while their roommates are out doing much more interesting things. But Wei Wei shuts her up, calling it her fault.

They ride on Er Xi’s scooter around the campus and come across a crowd staring at a basketball game poster. The silhouette hints that it is the campus Da Shen (the male equivalent of goddess), Xiao Nai, which gets all his fangirls excited. Exposition minions tell us that Xiao Nai is in senior year now and is rarely seen in campus.

Wei Wei is not immune to Xiao Nai’s charms either, as she tells Er Xi that they must be an hour early to get the best seats in the basketball court. Wei Wei explains that she is a huge fan, as they are also in the same course, and has downloaded all the softwares Xiao Nai designed. She says if the real world is like the gaming world, Xiao Nai would definitely be number one with his talent.

In a computer store, two girls are buying a hard disk as part of their plan to get help from one of the computer engineering guys. Meng Yi Ran, the campus beauty, asks if it will work and her friend assures her that there is no way they wouldn’t help knowing it is her. They are surprised at how expensive it is though, and tries to haggle with the owner. This is when Wei Wei and Er Xi comes in and overhears.

Wei Wei, who knows a thing or two being a computer engineering student, tries to help Yi Ran and points out that the owner is trying to sell a secondhand good for a higher price. Upon hearing it is Bei Wei Wei, Yi Ran smiles and basically screws her over, saying she believes the owner wouldn’t lie to her. Besides, he needs to make a profit too. Ugh, this girl.

Er Xi is as indignant at Yi Ran’s attitude as I am. She says it must because of their (one-sided) rivalry over last year’s campus beauty ranking. Yi Ran won with a photo which Er Xi says is photoshop-ed over a few days, lol. Wei Wei doesn’t think it’s a big deal, though she does wonder why Yi Ran acts like this when she won the title. Er Xi: “Maybe because her chest is flat?” Pfft.

Wei Wei excuses herself to go to a PC café, where Xiao Nai (Yang Yang) is discussing with his uncle about his plans to start his game company. Uncle promises him a gift (the PC café) if he wins this chess match, which Xiao Nai of course does. But he turns it down, preferring to work from the bottom. When they leave the room, Xiao Nai spots Wei Wei using a computer nearby.

He doesn’t know her but he is mesmerized by the way her fingers move across the keyboard. He has a stone face but he smiles seeing the way she plays the game. He moves closer and stands behind her, watching her defeat the guy who challenged her earlier. Xiao Nai stones while Wei Wei leaves, not knowing her Da Shen is just behind her.

When Wei Wei returns to the dorm, Er Xi recounts the Meng Yi Ran tale to their roommates Xiao Ling (Yu Qin) and Si Si (Song Xin Jia Yi). Thanks to that fiasco, Wei Wei has to resort to buying computer parts online and fixing it herself. She looks for her red notebook, where she makes notes about the game. She explains that it might help her become a game designer someday, preferably in Feng Teng Corp (from Boss & Me!).

In the literature department, Yi Ran confirms with her friend Na Na that it was really Bei Wei Wei yesterday. Even though she compliments Wei Wei’s looks, it looks more like she is fishing for her friend, who is more like a minion really, to tell her she is prettier. Na Na is really prejudiced against Wei Wei, thinking she is just trying to show off her knowledge in the computer store earlier.

She brings up the photo their friend Cao Guang took a few days ago, where Wei Wei got off a sports car. She says Wei Wei is not as innocent as Yi Ran thinks. Cao Guang (Johnny Bai Yu) enters and when pressed for the photo, he says he has deleted it. Na Na wonders if he has fallen for Wei Wei but he scoffs. He wouldn’t like a girl like Wei Wei (prepare to eat your words, boy!). Yi Ran just looks really thoughtful, absorbing all this in like ammo she will use someday.

Laptop fixed, Wei Wei logs into the game and find Zhen Shui’s request for a “divorce”. She is surprised but agrees easily. Zhen Shui wants to compensate her with an equipment but she turns it down. After all, they got “married” for a quest. They part without much fanfare.

Ni Ni finds Wei Wei picking herbs and she breaks the news that Zhen Shui is soon to “marry” Xiao Yu Yao Yao, who is selected as the most beautiful in the gaming forums. Ni Ni thinks that it is a pity. Apparently in the past Yao Yao is aiming for the number one in the rank, Yi Xiao Nai He. They were spotted together in the past. But it is obvious Wei Wei doesn’t really care for gossip, especially in-game gossip.

Hesitantly Ni Ni tells Wei Wei that there is also gossip about her. She is the only female in the ranking, she never asks other guys for equipment, and she never post her photos either. Everyone thinks she is a man behind the female persona. Wei Wei is so stunned and complains about a world that only cares for appearances. Er Xi chimes in to complain about that: “If you say that as a campus beauty, what about the rest of us peasants?”

Wei Wei receives the gaming notification that says Zhen Shui and Yao Yao has gotten “married” and heads over to attend their wedding march. But she gets an upset stomach and goes off to the washroom, leaving her avatar idly standing in the path of the march. It gets everyone curious about the “leftover” from Zhen Shui’s past, who thinks she is here to cause problems. They all wait to see a good show, nothing quite like a jilted lover at her past lover’s wedding.

Back in front of her laptop, Wei Wei finds herself at the centre of attention. If she leaves now, the peanut gallery will definitely think she is running away. So she decides to set up shop and sell off her high-level medicine. A dissatisfied Zhen Shui demands from an explanation, and poor Wei Wei helplessly answers that she is just here to check out the celebration.

The march moves on, and Wei Wei closes shop after selling out her inventory. She hears someone calling her and sees Yi Xiao Nai He, the number one fighter in the server, staring at her. He asks her opinion about the wedding earlier. Wei Wei wonders if someone as great as Nai He is here for gossip but answers that it is a grand one. Nai He: “Then do you want an even grander wedding? Get married to me.”

Ryu: This is exactly what I needed after three entire weeks of misery. It is faithful to the original story and covers all the points that make it such a fun read, while fleshing out the plot and characters that never got the attention they deserve. What I appreciate most is those details feel organic to the story, instead of manufactured complications. Characters like Cao Guang and Meng Yi Ran weren’t important to the novel because they never were important to Wei Wei. But this is a drama, so we see more things from more perspectives (also, we do need to fill more screen time). Win-win. I am actually surprised how much I like this. Show, please don’t screw this up for me. Okay? Okay.

I love how well this show sets up our main character Wei Wei. Of course I adore her character from the novel, but I like how the drama shows us the type of person she is. I really admire how no-nonsense she can be. She doesn’t care for gossip or beauty rankings or when some girl decides she would much rather pay an exorbitant price for a third-rate product, thankyouverymuch. Above all, I enjoy her interactions with her roommates. They make me miss my best friends. I also can’t get over how cute Rachel Mao is. She is like a little chipmunk. So cute, so squeezable.

We catch a glimpse of Xiao Nai, quite literally Da Shen. We see more of his ridiculous popularity later on, and while I totally get it, it is still ridiculous. So, Da Shen is perfect. I actually have a problem with how perfect he is, in fact, I can’t think of anything that he is not good at. In the book, it is understandable because we see things from Wei Wei’s perspective and she pretty much puts him on a pedestal. I hope the show does better and humanise him more with some flaws, like not knowing how to tie his shoelaces or not being able to sleep without a teddy bear.