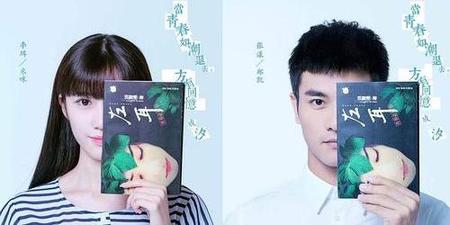 In light of the drama version news, I finally sat down to watch Alec Su‘s directorial debut of the movie adaptation and I’m left emotionally unmoved. The plot moved so quickly without a moment for the characters to breathe and for repercussions to sting, leaving me without a connection to the characters. It didn’t help that the characters were pretty unlikable. Lol. I think a drama version would’ve been better road to take. The Left Ear is a Chinese novel about teenage love and regrets written by Rao Xue Man. Our heroine, Li Er, is a 17-year old high-school student with a deaf left ear. She has a crush on the top kid at school and befriends a rebellious bar girl of the same age. Her world takes a turn when the said bar girl is tasked by the boy’s half brother to ruin him. The bar girl accomplishes her mission but at a great price.

Mi Mi as our female lead, Li Er. A total new face. She’s a graduate from the music school, Xi’an Conservatory of Music, in China.

Male lead Zhang Yang is played by Zheng Kai 2 (I added 2 because we have Run Brother‘s Ryan Zheng Kai as well). He’s not a new face and you might remember him as the hot general in Ruby Lin’s Qing Shi Huang Fei and recently in Huang Xiao Ming’s My Sunshine movie. A hottie indeed. 😉

Ma Yin Yin as the second female lead, Li Ba La, aka bar girl. She’s new but not unrecognizable. If you follow music shows, she’s one of the top contestants in The Voice Of China this season. Listen to one of her song rendition below.

Huang Ren De (The Four Horsemen) as the second male lead, Xu Yi, whose life is ruined by the bar girl. The role was played by Yang Yang in the movie.

Zhou You as You Ta, female lead’s protective cousin.

Amelie Xu Ling Yue as Jiang Jiao, the girl who provides money flow to our poor hero and acts like a possessive girlfriend. Amelie participated in 2012’s 61st Miss Universe China and was a runner-up. She is really pretty, with a nice smile.

Are we doing synchronized crossing of the legs?