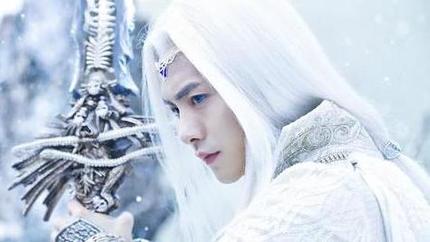 I knew the production team would take their time in releasing stills so I waited…and waited…and finally, a good amount of photos to post! They haven’t revealed the costumes for our leading lady, Victoria Song, yet, so fanboys would have to wait a while longer. I really like that they kept the white/silver hair aspect of the characters. For those who didn’t read the previous posts, Ice Fantasy is the drama adaptation of Guo Jing Ming‘s fantasy novel, following the epic battles for the throne and the love-hate relationship between two brothers (Feng Shao Feng and Ma Tian Yu). One who wants nothing but freedom and the other one wants nothing but grants him that wish; however, he goes about it all the wrong ways.

*note: more pictures to be added as they come out

*note #2: since a few skipped Dan Hennah’s poster below (lol), I will emphasize that he’s invited to join the art team, hence the strong similarities to his other work: The Hobbit.

Our male lead, Ka Suo, the older brother and King of Ice Tribe, played by Feng Shao Feng. I like the added hair ornaments for each character.

RESERVING THIS SPOT for our female lead, played by Victoria Song. Her looks/costumes are not revealed yet. Plus, they are editing the storyline to add more scenes for her since romance wasn’t the focus as much as the bromance.

The younger conniving brother, Ying Kong Shi, played by Ma Tian Yu (Surprise). He looks beautiful. Too much pretty for me! Hoping that this role will bring him into the limelight!

Zhang Yu Jian. He is in Nirvana In Fire, do you recognize him?

This is Xua Ke.

She looks like a badass. Actress Lu Zi Zhen.

The novel is translated by Kris Wu’s adoring fans at Fiery Dragon Breath, go check it out if you’re interested.