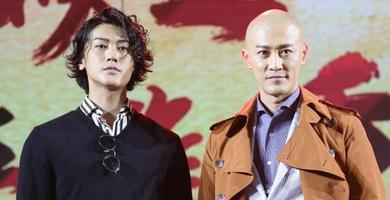 Lol. So many monkey kings running around in 2016 and 2017, both on the big and small screen. Here’s another drama related to Sun Wu Kong. Hong Kong actor Raymond Lam will take on the titular role while Japanese actor, Akanishi Jin, joins the production as probably the most handsome Er Lang Shen ever. Rising actress Jiang Meng Jie will play Holy Mother and Kenji Wu rounds out the cast as Tian Peng aka Pig. The Legends of Monkey King (大泼猴) follows a mortal man who accidentally time-travels to the past and finds himself the Monkey King. Not willing to accept a fate forced on himself, he sets out to the change the course of the future. At least this one has a twist in it.

Jiang Meng Jie as Holy Mother. If you haven’t watched Lotus Lantern, she’s sister to Erlang Shen and marries a mortal man, which angers her brother and is then imprisoned under Mount Hua until her son, Chen Xiang, chops the mountain and frees his mother. So happy she’s getting bigger role!

Directed by Huang Jun Wen, Lan Zhi Wei, and Li Wei Ji, The Legends of Monkey King will film for five months for a release on youku with 45 episodes.