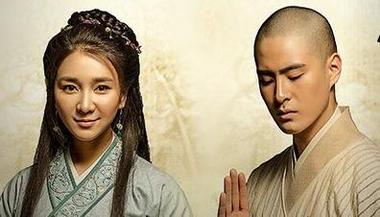 Ready to take a peek at the angst-iest novel being adapted? Last week Faithful to Buddha, Faithful to You (不负如来不负卿) revealed the fresh-faced OTP and this week we have posters and stills ready to be scrutinized. Lol. I love the spectrum of golden colors and subtle hues of the costumes, but somehow they managed to make the ladies not as pretty?

Brief Summary translated Last Week by moi: The story follows an epic love story through time when a historian student successfully time-travels through time (many failed attempts before). She’s 23 when she meets our little monk, Kumarajiva, who is 13 at the time, and their relationship begins as teacher and student (Xiao Long Nv and Yang Guo?), but he develops a crush on her ever since. Years passed for him but only mere months for her and they meet again when the little boy is at the blossoming age of 24. They recognize their love for each other but he is man with a divine mission and they suffer immensely. The third time they meet again, Kumarajiva is in the worst years of his life and she stays by his side through it all.

I don’t know about ya’ll but I think this new kid on the block might just take the cake for the handsomest monk!