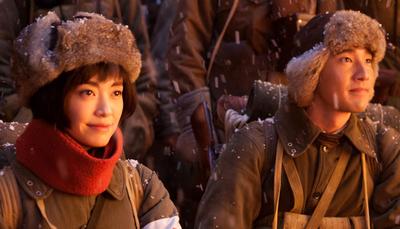 Why? A drama version and a movie, okay, I’ll take that with a bitter face. But TWO movie versions of the same novel filmed at the same time? Just you wait, they are gonna announce a drama remake soon! The first adaptation I had talked about is called The Ghouls starring Chen Kun, Shu Qi, and Angelababy. The second one is called Ghost Blows out the Candle: Demon’s 9th Tower/Floor (roughly translated) starring Mark Zhao, Yao Chen as leads, and Tang Yan and Jerry Lee in supporting roles. Yep. You saw that right. TANG YAN. Bloody heck! You guys can’t say I’m crazy now…..she’s definitely a robot.

I guess they can’t get enough of tomb stories nowadays. Maybe the novel is long and each production focuses on a separate story? Whatever! Looks like dead people’s resting grounds are bound for adventures this year. 😛

And first stills for Ghost Blows out the Candle: The Demon’s 9th Tower. This one is directed by Lu Chuan (City of Life and Death, The Last Supper). Release date: 10.01.2015.

Press conference! Tang Yan is there. I don’t know how. Lol.

Look at her arms! I refuse to look at her twiggy legs.