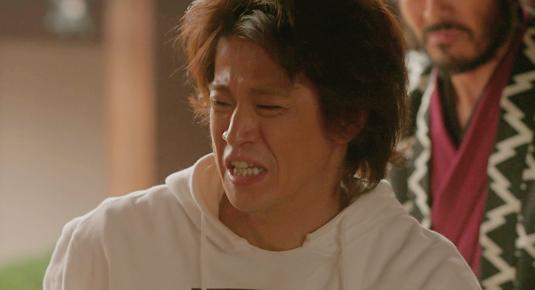 Not as funny as the first episode but we do get a lot more background info about the key players. It remains light-hearted and the music makes me swoon like a mad girl. It’s gorgeous! I need those scores now!

Saburo/Nobunaga meeting with Dosan Saito (Toshiyuki Nishida), Kicho’s father, so his father-in-law. Thanks to the frustration of picking out the right outfit, Saburon ends up wearing his student formal suit, which puts thing in his favor because…guess what? His father-in-law is also a time-traveler! A policeman at that. I find it adorable how he’s clutching the can of potato chips like a fanboy. The not-so-good news? He’s been stuck in the past for 40 years.

Contrary to the hearty conversation, Dosan sends his (bitter) son and troops to Oda’s clan and orders Kicho to be married off to another powerful Daimyo. If she doesn’t, they will attack and wipe out Oda’s clan. Saburo is shocked at the news but he has no authority in the matter because every single life in the clan depends on this bridal transaction. Sad. Defiant and bitter she may be, Kicho dons on her mask and coolly tells Saburo and his people that she’ll accept her new status as another lord’s concubine because she has no interest in dying with them. Aw.

If looks could kill, Tsuneoki could chop off Kicho’s brother’s head.

Through Kicho’s maid, we learn about her miserable childhood. She was loved by her father and he even gave her his treasured police cap before sending her to another lord’s residence to be held hostage. Years later, Dosan attacked the said residence without second thoughts that his daughter could be a casualty during the chaos. She met him at home and he immediately married her off to Nobunaga without as much as a how-do-you-do. No wonder the poor girl harbors a heavy heart and refuses to believe that her dad ever loved her. The little girl is wicked cute!

Saburo/Nobunaga realizes Dosan’s strategy and explains it to Kicho. Dosan puts on a mask as the heartless father in order to secure her safety. He searches highs and lows for the household name that is written in history books as the winner of the Warring States period.

Dosan’s lack of fatherly affection doesn’t end with Kicho, he treats his son, Yoshitatsu Saito just as badly and I might argue he doesn’t even like him. This leads to the growing resentment in Yoshitatsu and he raises a rebellion to crush his dad. Dosan’s puny-sized army awaits to be slaughtered. His soldier finds the history book Saburo lost and he reads his own outcome. Betrayed and killed by son’s army.

The distressing news reaches Saburo and he wants to help. Lucky for him, his supportive clan members vow to back up their daimyo at all costs. Aw.

Facing his imminent death, Dosan calls Saburo stupid repeatedly. When he reads up the history of Nobunaga’s demise, the words of his own story have changed accordingly – that Nobunaga’s troops were coming to his aid. Appalled that history is changing, he rips out pages of Nobunaga’s death and relays two messages to Saburo and Kicho before he ends his life in battle.

Saburo quietly enters Kicho’s chamber and his face says it all. She tries to hold up her emotional wall of steel but everything crumbles. Not knowing what to do or how to react, Saburo simply watches and then places a hand on her shoulder as she cries her heart out.

This is the first time she calls him “Nobunaga-sama” and thanks him for sending troops, even if the troops didn’t arrive in time to provide support.

Dosan’s note to Saburo, “Create history with your own hand. I am certain you can overcome even your own fate.”

Saburo and Kicho enjoy the night skies and as the camera pans out, we see Tsuneoki hiding in a dark corner and holding the talisman he bought for Kicho to pray for her safety. Aw man. Another soldier in a forbidden love with his lord’s wife? I have Three Musketeers for that sinful ship and it’s already killing me!

Outside the castle, the mysterious henchman (played by Takayuki Yamada) killed a horseman and takes his place to infiltrate Nobunaga’s residence under a new name. Tochikiro Kinoshita. Oh yes! He’s finally gonna share the same screen as Saburo. It’s ironic though right, in Crows Zero, it was Shun’s character that challenged Takayuki’s authority in high school and here it’s him trying to bring chaos to Shun’s castle. hehe. Everything is made more funny because Saburo beams at the shooting star in the sky just as Tochikiro smiles at the entrance.

Unlike last episode, I did now know who Tochikiro Kinoshita was in history. A quick google search reveals that he was one of Nobunaga’s trusted generals and eventually killed Akechi Mitsuhide to avenge for Nobunaga’s death. Woohoo! This is getting exciting! I do hope Osamu Mukai has more meat to work with though because his character so far doesn’t have anything significant to add to the story and I would love to see him flex his acting skill. I’ve never really connected with him before.