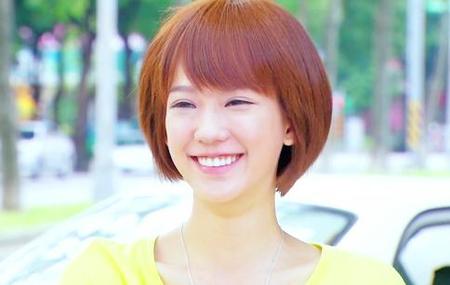 And that ladies and gentlemen, is the lesson for today! Never let anyone rain on your dreams and definitely, never let anyone tell you to stop dreaming! 🙂

SETTV’s latest offering on Fridays gives us Aim High, (another) story following (another) group of friends as they live, dream, and struggle in today’s brutal working society. You sense my skeptical attitude yet? At the end of the hour, I liked what I saw in these adults. The name brings me back to my own high school moments, how we gathered around the teacher’s desk and guessed who scored the highest on the weekly calculus test (such nerds we were!), and one of my friends would say, “Aim high, so when you fall, you fall within your true range.” The response he always got was, “Shut up!”

Now that I think about his quote, I snicker, that puny-sized wise kid.

I liked episode one and I attribute the majority of my liking to Summer Meng’s performance as the good-hearted Xu Yi Fen. We meet her when she was a senior in her college, attending a seminar by the male lead in which he encouraged this generation to be more proactive towards their goals and dreams. His quote, “Live for nothing, or die for something,” resonates with her and she ends up pinning it and using it as a motivational speech towards her own dream. She wants to help other people reach their dreams by developing an app targeting today’s young adults.

A year later, she’s out of college, and we see her doing odd jobs and saving up every penny to invest in the development of her app. However, we don’t see her three good friends in college anymore and she’s sharing an apartment with another female friend who appears shady at best. That said friend scams her of all her savings and tries to escape before the day is over.

As for the breakup between Yi Fen and her three best friends, it’s revealed at the end of the episode and a wave relief washes over me. It was not melodramatic, it was not because of boys, love triangles, or petty fights. They obviously don’t hate each other but the failure of putting their heads and hearts together to develop the app proved to be hectic and draining, with each girl still trying to figure out what they wanted to be/do in life. After the incident, the four friends didn’t keep in contact because none of them wanted to admit their faults.

However, they do keep track of each other secretly (with batty eyelashes, hehe) through the same medium – their college professor. With his upcoming wedding, he plays cupid and invites all four ladies.

What I like about this setup: We finally got a story centering around four females as friends (why is that so rare to come across?), as opposed to the overwhelming amount of bromances in dramaland (I love those, but us females are capable of unrivaled loyalty too, am I right, ladies?)

The other three friends do not fare so well after college. Yan Mao Tang (Guo Shu Yao), nicknamed Mao Mao, works at an insurance company and to be officially hired, she must meet the annual quota of a certain amount. Below, she’s trying to settle a contract with a rich businessman but the lecher has other ideas for their meeting. She leaves before things get out of hand. I really hope the drama touches some dark places for her character. The lady in red, Hao Mei (Huang Wei Ting), is under their Professor’s wing and dreams of becoming an economist to help the poor. Tian Ming Xian (Lyan Cheng Yu Xi) is the girl with the short-do and she’s the free-spirited one of them all. She holds two jobs, a taxi driver and a poet.

As for our male lead, Yu Qi Feng (Chris Wang), he appears first like this…. I kinda lost my train of thoughts.

His character reminds me a lot of George Hu’s Bu Fan but less sharp tongue and a bit more warmth. As the winner of an app contest in recent years, he was hired by Capcom company to lead their Development Department and is currently in charge of the app competition Yi Fen participated in.

The other male lead, Ren Dao Yuan (Lego Li). I don’t know what he does yet but one thing rings true, he has a thing for Mao Mao and chases after her when he sees her on the train. They’re likely a couple but we don’t know the details of their hookup or breakup yet. In this scene, sexy men brood and play darts in a bar.

The story so far: Yi Fen chases after her scamming friend in time to halt her escape (with innocent Qi Feng in the backseat! Lol.) She demands to know why the latter could crush the dream she lives and breathes for in the past two years. The thick-skinned scammer calls her dream a fantasy, something unachievable. Yi Fen: “But you don’t even have a dream. What right do you have to make fun of me?” It all comes down to money and Yi Fen is stumped.

Not to worry, the hero stumbles out of the vehicle, apparently still carsick, thanks to Yi Fen’s maniac driving. He says, “Of course dreams are not invincible. But compared to you, she’s living her life much more meaningfully. Because she would do anything for her dream, and no matter how tired she is, she would feel energized.”

My favorite part is when he turns to Yi Fen and lectures her as well, “You’re worse. Why would you let someone else hold your dream for you?” DING DING DING! He’s awesome!

He’s about to leave and Yi Fen voices out her indignation, “I’m not an idiot. I believe people. I pursue my dream. Those at fault are people who mistreat that trust.” After he verifies that he has changed the rules to the app competition (no one needs to send in the complete working app, just a detailed proposal), Yi Fen beams. Dreams should not be cut short because of poverty. *Please clap for the man*

The orientation day happens to be their Professor’s wedding day as well. While the three friends attend the wedding, Yi Fen prepares for her presentation. The three girls make up and apologize to each other for their lack of commitment and when they discover that Yi Fen is still pursuing the dream of making Dream Life an app, they drunkenly ride a taxi to the location. You see, this is the typical Tdrama-obligated humor scene and I’m happy to report it didn’t last that long.

They hop on stage while she’s presenting her idea and hug her, saying sorry multiple times until Qi Feng’s patience runs thin and he walks up onstage to warn them. Cue! Mao Mao trips and pushes Yi Fen onto Qi Feng. Their lips are millimeters away from the other and all it takes is another fall by Hao Mei to seal the accidental kiss, adding it to the long list of trip-fall-kisses in dramaland.

I don’t want to get burned again for falling for something so quickly but I really enjoyed the first episode. I have never seen Summer Meng prior to this but she ropes me in with her perfect display of vulnerability. It’s so palpable and honest and genuine that all I wanted to do was give her a hug. Also, props for looking cute in that hairstyle. She’s adorable and if this keeps up, I might have another name on my stalker list. Lol. Though she should enhance the strength of her voice when she’s doing confrontational scenes. It was rather meek when she argued with that scammer. She reminds me of Amanda Chu but the latter is the stronger actress. Summer is still young and I look forward to seeing her improve in the following weeks. Go! Go! Go!

Another character with an interesting background is Mao Mao. For all those in the business world, you know how cut-throat competitions are and not many weak souls can survive, hence I’m intrigued with her upcoming moments of weakness and conflicts. I’m screaming go dark! Go dark!

One iffy thing I have with Yi Fen’s story is her app, Dream Life. It seems neat and pretty on paper but not perhaps in practice. I’m curious to see where they would go with it.

I think they hit the jackpot casting these two beautiful beings as the main OTP. I have not dig a couple in Tdramaland as quickly as them. Not sure if it’s just me but both actors possess this genuine quality in their portrayals that make them relatable and easy to root for. Another plus factor – they didn’t start off on the wrong foot. See above, the aftermath of the accidental kiss. Both are awkward, she tries to explain that the kiss didn’t mean anything, not that kissing a man means nothing….bluh bluh bluh. He waves it off as an accident but we saw it affecting him more than he let on.

I also like the fact that he isn’t the perfect rich guy with a perfect rich job. He’s struggling to get his winning app on the market. Though he won (unsure of the timeline), the CEO keeps delaying the launch of his app, with excuses that it’s not the right time because the company mainly targets gamers. Clearly, he’s fed up and I appreciate the parallels in their story threads, in that Yi Fen and Qi Feng (who named the characters like this to confuse me?!) are at different social positions and yet they are dealing with essentially the same problem – making their dream a real tangible success.

Let me know your thoughts if you’ve started this series! =D