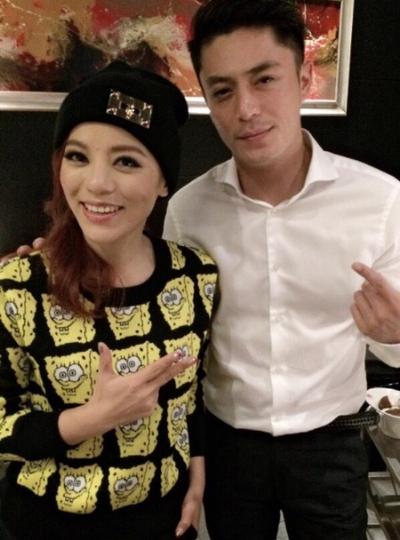 Aww!! I love friendship moments outside of filming projects. The princess of drama theme songs in recent years, Della Ding, recorded the themesong for Perfect Couple with Wallace Huo earlier this year, and the two have become good friends since then. Last night, he appeared at her Live Concert in Beijing and performed “Good Times” in a perfectly fitted navy suit.

In other news, why don’t pop groups ever come to the East Coast to perform?!! I’m dying to attend a concert!

The theme of her concert is “True Love” and near the end, a viewer in the audience proposed to his girlfriend. <3!

No, his diamond ring is much smaller than this. 😛

I admire singers and performers. You would never see me standing on a pole like her. Lol.

Guess what song she sings here! ^_^

When Wallace shows up in a neat suit, she teases him, but he replies that he dressed up for her. heh. What a flirt. 😀

Can you imagine Wallace sprinkling sparkles onto his head in the bathroom? I can’t. hee!

Hugs! He looks so awkward! haha!

Near the end of the song, he reaches out his hand and she shyly takes it. Wallace bites down his embarrassment when the crowd screams. >.< Why so cute? And why can’t you have this kind of chemistry with Miss Li Ying in Flower! Lol.

Pictures not enough? Watch the performance below! Observe his face when the crowd go wild at their contact!

Go here for the HQ version since I can’t embed it. But gosh, they sound perfect together and he sings live very well. They’re looking shippable. 😉