Guess who’s home and have time to watch dramas! Kappy! Why? She got her four wisdom teeth extracted. Bloody hell, let me tell you. I’ve been high on pain drugs for the past 3 days. I think it makes me nice and tolerant of everything. Lol.

Our Glamourous Time: Our heroine Lin Qian (Zhao Li Ying) is an aspiring Entrepreneur who gets kidnapped by the drug lord on her vacation. Our hero Li Zhi Cheng (Jin Han) is sent on his last army mission and he saves her heroically. How is any girl gonna forget that soldier man? It definitely opens with a bang and my thought during the entire explosive scene was…..are they gonna run out of budget because of episode 1? Surely they won’t.

Then comes the CGI rooftop scene in episode 3 that had my dying from laughter. REALLY?!

Hawick Lau cameos as the dead older brother…now our hero has to return to save the dying company. He chooses to oversee the smaller sister company, Aida, where he corners our heroine into an elevator and explains to her why she should be his designer over her senior brother’s company. She finally gives up and agrees.

Zhou Yi Wei plays Lin Qian’s older brother, awwww. So cute they reunited as siblings. The mysterious business lady, Grace (played by Cao Xi Wen) who was very fond of the dead brother and vows to find out the reason behind his death with our hero.

This is the house/workplace where Lin Qian resides….is it a wonder she can’t afford the rent?! The sign outside says 1987, a nod to Li Ying’s birth year. Lol.

This part is funny, he makes her exercise and she comes up with different excuses to avoid it. He finally settles on jumping jacks and as he ponders on whether to pick up his sister’s phone call, Lin Qian jumps her way over to sneak a peek. She knows he has a hard time talking to his sister and suggests a few things he should do.

When they are in close proximity, it’s him who blushes and runs away while she smiles knowingly to herself.

It’s in episode 8 that he cracks a big smile for the first time and she notes it, so did I. It’s also in this episode that she finalllllly recognizes him as the brave soldier who saved her while he knew all along. HA!

A side note, did anyone notice Li Ying and that cacophonous wig they keep putting on her?! I swear in one scene they switched her hair back and forth three times and I started to think it’s alive… 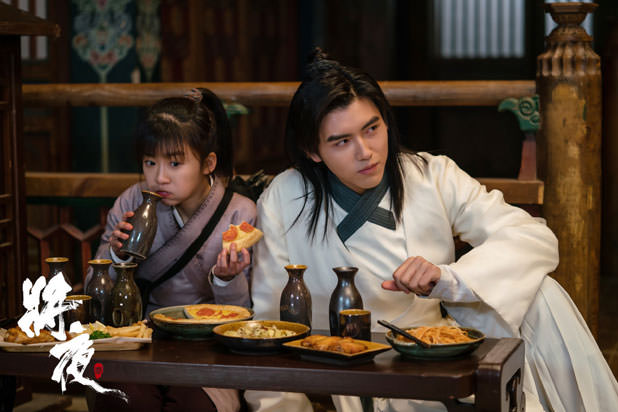 The other drama that I started to watch is Ever Night and I’m confused because there are so many characters! Besides Ning Que and Sang Sang…. it’s a blur for the rest. LOL. Maybe it’s the drugs that are hindering my face recognition skills. XD I think the plot will pick up once Ning Que enters the prestigious Tang Academy. Though when he pulls Sang Sang’s hair, that rubs me the wrong way, he makes it up by buying rose toner for her dark skin. That just melts me. haha.

A side note, ancient pizza Sang Sang is eating… Lol.