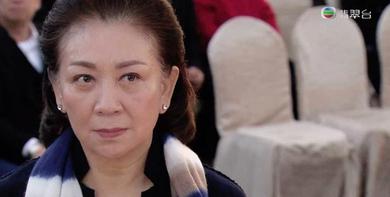 Welcome back to dramaland, Nina!

I have been looking forward to TVB series, The Unholy Alliance, for a while now and it’s finally aired! With the same production team (from Jazz Boon) and main cast lifted from last year’s hit series, A Fist Within Four Walls, The Unholy Alliance is considered its modern brother, led by veteran actress Nina Paw.

What’s the story about?

Nina Paw plays Ling Hung, the center matriarch in her family and a powerful businesswoman. She’s fair in dishing out rewards and punishment, hence she plucks up a handful of trustworthy and loyal workers but also countless of enemies on her back. Simply put, you don’t make it to the top by having friends and being nice. Because she’s often involved in solving dangerous threats, she sends her biological son, Ko Tsz Kit (Ruco Chan) away to Taiwan to be raised by her good friend. However, his identity is exposed in his adulthood and the good friend is killed, sending him in a ragey quest to find the truth behind the assassination.

In the alliance of powers, one man stands out from the rest and it’s Wei Lui, played by Kwok Fung. He likes to be the center of attention and uses violence to solve problems. He has three kids, two boys and a daughter (Elaine Yiu) he dotes on. To complicate matters, the daughter is dating Ling Hung’s adopted son, Kent (played by Joel Chan). She respects Ling Hung as she’s also her attorney. The girl has a good head on her shoulders and tries to be the peacemaker whenever her father and brothers do physical damages to other people.

It’s a slow start; the first five episodes showcase an excessive amount of gun-shooting and explosions; TVB way of catching your attention. Is it exciting? Yes, but it also borderlines on being showy and unrealistic as some netizens pointed out on weibo. But if you can get past those episodes, there’s an exciting story and some wonderful characters and performances to see.

Kit doesn’t get to talk-talk with his mother until the second week and learns his identity as her son. However, things are not peachy because he believes she’s a ruthless power manipulator who uses her wealth to get her ways. She doesn’t help her case by being cold and practical to him. But when he’s hurt, their first phone call together is brilliant. Nina Paw is amazing in displaying her tentative motherly concerns while her stubborn son remains quiet throughout the one-sided conversation.

This is not the first time Ruco Chan and Nina Paw collaborated together. I remember them during his ATV days in the series Stupid Kid where he played her autistic son and was paired up with He Mei Tian (oh the memories!). In The Unholy Alliance, Ruco seems to be playing a very similar character to his Fist‘s Chor Au Kuen; stubborn, reckless, and idealistic in worldly matters. In week 2, his character has now softened up to his mom and even agrees to become her bodyguard-in-training, which is adorable because he worries about her frequently; her enemies sneaking up, her drinking during business talks, her schedules, etc.

Mom finds him a cute puppy of course but she also wants to toughen him up for the cruel world they live in.

On the other hand, Nancy gets to do the bulk of the action scenes as Kit’s bodyguard and I love the reversal in having our heroine saving the dam-hero (I’m coining this new slang! Sounds wittily like damn hero!) Hee! She also looks really hot in jet black and short leather shorts doing kicks and spins. However, I think her character is very similar to Fist’s Tiu Lan as well and is too hyper for me to sink my teeth into. I wish she was a cool and no-nonsense bodyguard instead.

One thing that I appreciate is the action sequence, which is done convincingly by the cast. Check out the video below of Ah Yan in a brawl with her boss, Ling Hung’s bodyguard, played by Jimmy Au. The punches are strong and precise, while the moves are direct and forceful.

The video below is the moment where I fell for Elaine’s character, Kate. I know she’s smart and beautiful, but she can hold her own while being kidnapped by three men? Major brownie points. I just like that the girls can take care of themselves in here.

In the above scene, I thought her being shoved in the van is the end of the fight but Kate is trained badass. With her skinny frame, one would think she’s a weak opponent and I think that mindset is always an advantage for smaller folks because they use other means to fight. You see them heels she’s wearing and jamming in the guys’ faces?

And of course when boyfriend Kent chases up to the van and opens the door, she’s back to her beautiful composed self, “I told you not to make me wait for too long.” ;D

My favorite pairing right now is actually Kate and Kent because they are the star-crossed lovers of the series with their parents at odds every step of the way. In the beginning, their relationship might not be your cup of tea because they’re always making out and kissing whenever in close proximity. But as the series progresses, they become sweet together and things really heat up in week 2 with a wedge thrown in – her proud father stealing goods and letting the blame fall on Ling Hung. Her father puts on a good show and makes her believe in him and hence she’s reluctant to help Kent “investigate” her dad. Kent trusts his instincts and follows through with his mom’s plan in exposing her dad. In the last minute, he’s conflicted because she shows up to save her brothers, begging in tears for the shooters (Kent and Yan) not to kill her brothers.

Kent is my favorite character right now and I’m seeing Joel Chan in a new light. His Kent is handsome, suave, sexy, cool, and collected. The moment he chooses to pursue Kate, he has chosen to love the hardest way possible and it warms my heart that when all is set and done and Kate feels terrible for doubting him and trusting her dad, he doesn’t berate her at all. He climbs through her window at night like a thief to bring her wine and comfort her.

I hope they have a happy ending. Please show!

Another interesting aspect is Ling Hung’s sons. I hope Kent (the adopted son) and Kit (the real son) will get along once the latter’s identity is unveiled, I would hate to see such a well-performed character like Kent be sidelined for all his efforts and genuine care just because he’s not her real blood. When it comes down to it, will she trust the son she raised and nurtured or the son she gave away and recently came back? An interesting dilemma when both sons are good-hearted men. Some tension is fine but I’m looking for some much-needed bromance. So let them work together!

When she plasters on a happy face after beating constipated-looking Wei Lui. Nina Paw, so good.