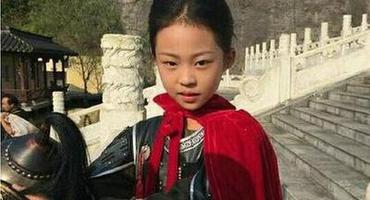 And you thought The Legend of White Snake was cute? Wait till you see the kiddie version of Hua Mu Lan (花木兰)! I couldn’t stop smiling at the kids in soldiers uniforms! The same group of child actors from the program Star of Tomorrow. I think it’s a genius idea for the kids to have a feel of acting and simply enjoying the sets, equipment, and making life-long friends. It’s precious!

Our legendary female warrior who takes the place of her sick father in the army is played by Liu Dai En (9). She was Green Snake in Madame White Snake.

He’s the Grand Chancellor, played by Yang Bin Kui (10). He was one of the kid actors on Taekwondo Girl with Yang Yang!