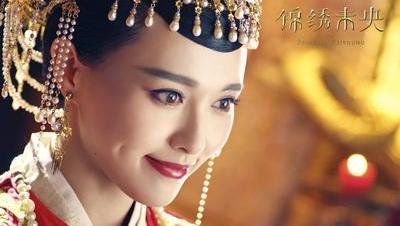 These stills make me want to get married in a palace drama, minus the cat fighting. Lol. My wardrobe has a lot of dark colors and hence I lean in favor of colorful costumes, mostly because colors look good on them and not on me. XD Here is your ticket to the royal wedding between Tang Yan and Luo Jin in the novel-to-drama adaptation of the novel Princess Wei Young (锦绣未央).

Tang Yan was born as the kind-hearted Princess Xin Er of Northern Wei Dynasty but after her kingdom falls, she wanders around and is rescued by Li Wei Yang, an abandoned daughter of a respected tutor. However, Wei Yang dies protecting Xin Er, and the latter assumes Wei Yang’s identity to reside in her home, where she is disliked and shunned, and her journey of more suffering begins. But being trampled on boosts her fighting spirit more than ever and she rises to become a very powerful and cunning woman. Playing Wei Yang’s sisters are Mao Xiao Tong and Hsin Ai Lee.

Rising above the other women, Wei Yang marries Prince Ta Ba Jun, who is a bright, sunny, and compassionate man.