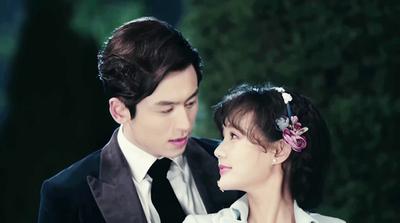 The narrator tells us that demons are just like humans. But their tears are golden, their blood pink. Aside from their strength, agility and the ability to fly, they still grow old and die. Come winter, they must hibernate or die and melt into a puddle. When they do, they turn into a baby without their memories.

A fight in the capital sends everyone, including a family of four, running. The mother sends her family away and stays to stop the English soldiers. Turning in her demon form, she swipes at the soldiers in what appears to be the most gentle way possible (though Ady An’s expression is anything but gentle!).

But the solders finally gather their wits and shoot her down. She takes bullet after bullet in her torso before dying. Her blood, as promised, is pink.

1915. Older daughter Nie Qing Cheng (Li Yi Tong) is all grown-up and is a dancer at a nightclub. When she accidentally hurts herself, a bright light flashes in her. She brushes it off as her hallucination and joins the rest of the girls on stage.

In the same nightclub, a gangster has invited the new sheriff Ming Xia (Zhang Zhe Han) to bribe him. When he turns down money, the gangster orders his men to bring Qing Cheng instead, who he notices Ming Xia has been eyeing. Qing Cheng refuses to be a damsel in distress but there’s a gun to her head.

Ming Xia points out that he became a sheriff because he can’t stand injustice. He’s clearly good at his job because he outmaneuvers the gangster using his own men. He drags Qing Cheng out by the wrist, but she’s not too happy about it. She tells him not to get any ideas.

Ming Xia calmly explains to her the situation: he has helped her this time and by acting like they know each other well, he’s preventing the gangster from coming after her again. He sends her home with his coat over her shoulders. It’s clear she’s moved by their encounter.

Back home, Qing Cheng’s father nearly catches her but her sister smartly defuses the situation. He doesn’t know she’s a dancer and it’s clear he wouldn’t approve. Qing Cheng tells her sister about meeting Ming Xia. Her demon energy(?) seems to be getting stronger, as the tub they’re using cracks from it.

The next day, it seems like Ming Xia has really left an impression because Qing Cheng even waits outside the nightclub for him. But he doesn’t appear and she’s left disappointed. Her lovesickness is all over her face, even the other girls can tell. She even dreams about him visiting her, waking her with a kiss.

Later Qing Cheng finds her sister crying. Qing Xin is a student at an upscale school and she is devastated over missing the most important social event of the year. Ever the doting sister, Qing Cheng promises to take her. And she does, by sneaking them in.

Qing Xin is enthusiastic to mingle but bullies insult her, asking if she even knows how to be an educated lady. They call her a wallflower but Qing Chen shuts them down. If no one wants to dance with Qing Xin, she’ll show them how good Qing Xin is.

Qing Cheng allows her sister to shine and before long, dance partners come by the droves. I like that she’s not above rubbing it in the bullies’ faces. She tells them the stink of vinegar (jealousy) is too overpowering and excuses herself for a breather.

Outside, she sees another girl pestering Ming Xia to love her. Qing Cheng runs up to him and with a wink, he understands and introducers her as his girlfriend. To prove his point, he even kisses her on the cheek. Qing Cheng returns the favour, hee. Upset with the sudden rival, the girl run away in a huff.

Alone now, Qing Chen learns that Ming Xia doesn’t know how to dance. She offers to teach him and he accepts. They twirl and twirl in the garden, so sweetly that it draws the envy of another couple. Ming Xia tells her he doesn’t want her to return his coat, so he’ll always have a dancing teacher.

It turns out that Qing Chen has been teaching Ming Xia dancing for months and her sister teases her for it. But her father has finally found out about her job and locks her in her room. She doesn’t despair for long. Using a make-shift rope, she climbs down her window. She has someone to meet.

When she arrives at the bridge, she is disappointed that she doesn’t see Ming Xia. But he is there and he is good-humoured even though he has waited for five hours. She tells him she can’t leave home anymore. She is upset that her father doesn’t understand her. With her sister’s school fees, there is no way they would survive without her salary.

Ming Xia tells her to yell her worries away, which cheers her up. He also seems to be looking at her differently. If before, he only likes her, now he has fallen for her. He narrates, “There’s one such saying: Some people, some things are meant to happen. I think this must be one of those moments.”

Ryu: Some shows go over the top to manufacture the most bizarre meet-cute, Demon Girl sticks to the cliches and it works well. I adore the earnest Ming Xia and his sense of justice. The fact that he patiently explains his actions to Qing Chen without putting her down, as so many male leads tend to do, puts him in my good book. He’s so perfect that his only flaw so far, his lack of dancing capabilities, is a plot device for our couple to get together. And I’m debating whether Qing Chen fits the bill of a Mary Sue but I really like her. It’s clear she loves her family and would do everything for them. I admire her for making use of her talent to make a living. Her character resonates with me on a purely personal level, but I think we can agree that Li Yi Tong is absolutely adorable.

With the hindsight of having watched up to episode 4, this first episode is pretty deceptively tame. Don’t think I will be recapping this because I don’t like where the plot is going. Which is a shame, because the show is so pretty, the acting is decent and it is always a treat to watch a Republican era drama. If it improves, maybe I will brave it with my fast forward button!