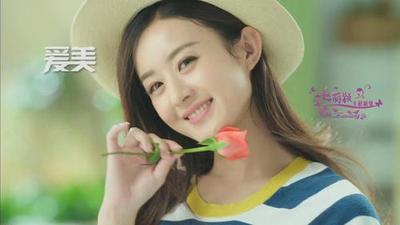 I can’t believe it’s been 10 years since our country bumpkin kick-started her career in the entertainment world. After winning Yahoo’s Search Star Game (搜星比赛), she scored her first CF. While she was in minor roles in dramas that I have watched, alongside actresses like Chen Qiao En, Ady An, etc.., I only ever started to pay attention to her elf-like features when she was cast in the remake of Huan Zhu Ge Ge (Princess Returning Pearl) in 2011 as the demure and intelligent Qing Er. The fandom really began for me with Female Prime Minister, buoyed by her fantastic chemistry with Chen Xiao and the onslaught of pretty, pretty visuals. So I guess one way or another, Yu Zheng brought us together. *snickers* Never thought I would say that line….

Well, first, let’s get these newly released stills out of the way. Zhao Li Ying’s wedding night with William Chan in The Mystic Nine and their battle to see who’s on top. LOL. I did tell you our girl is not the prim one. Hurray! MUHAHAH

Below you can videos of her during the Star Search competition. I still laughed and died of second hand embarrassment every time I watch her sing in these clips.

In the clip below, you will see her good friend Kristy Zhang as well. 🙂

And this is probably my favorite fanmade mv of her because it shows the fan’s dedication in compiling all her roles in the past 10 years.

Congratulations for making this far, Li Ying! Continue to do you!

When people ask me why I like her so much, I really don’t have a well-defined answer. Sometimes, there is no logical reasoning behind your affection. But I have come to like her old self and work ethics. Do I get angry when people don’t like her and post unpleasant comments? Not anymore. And let me tell you, I read countless of awful things about her both in Chinese and English. Do I respond to them?

Let my sister from the hood tell you the answer: