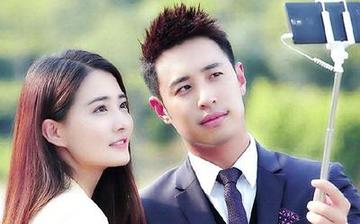 Anyway, it’s time to check back with melo drama, Be With You, an adaptation of Every Step Is Wrong, written by Lan Bai Se, the same author behind Loving Never Forgetting with Jerry Yan and Tong Li Ya. I can’t believe the last time I mentioned this series was June of 2015! Time flew and now we’re just waiting for a broadcast date to see a mean CEO Wilber and a broody Xu Lu our for revenge.

The original translation I did last year of the novel: Our female lead, Lin Wei Ling (Xu Lu), had a crushing childhood: she lost her mother very young and lives with her father in a big, empty house, with servants. She usually dresses like a boy just to play with the other boys in her neighborhood. But after they learn of her gender – they no longer allow her into their group. Even though she’s treated like a pearl in her father’s hand, he works days and nights. Then one day, after waiting endlessly for him to show up at the parents’ meeting, she fumes and heads to his company. Just seconds before entering the revolving door, a thud pulls her attention back. Lying bloody on the hood of her family’s car is a man all too familiar. Blood pools and encircles around him, his eyes never leaving her face, as if staring straight into her innocent soul.

The tragedy takes away her father and her ability to talk. She’s left to be taken care by her father’s “friend”. He lives with his wife, a woman with a beautiful smile, and their young son, Hu Qian Yu (Wilber Pan). He torments her, not knowing that she’s actually a girl (WHAT??!!). On the day of her birthday, he hears her crying and singing the happy birthday song. Angry that she lied, he orders his minions to stomp on the poor girl’s cake; the cake that she had to break her piggy bank to buy (kids can be so cruel).

The day he finds out that she’s a girl – such a horrible scene – is when he and his friends beat her up at the tennis court and strips her down to…nothing. That is when she cries, her body shrinking numbly to hide the horror and the embarrassment. He feels bad but he’s more afraid of being found out by his parents so he threatens her not to tell his mother.

She returns to take back what is rightfully hers.

Rachael Mao Xiao Tong (Miss Unlucky, Love is Back) as the heroine’s best friend and the frenemy CEO’s illegitimate daughter (Denny’s half sister). She’s the total opposite from our heroine – bright and sunny, easy to persuade and pacify. My cutie pie, please be a good friend! She likes our male lead, of course.

You see what I told you?! Stop hanging around him! There are three other male characters if you must love. Oh wait, three of them are….

Look at those bodies! Lucky Tong Tong! Caught in the middle. Lol.

The ladies together. So cute.

Denny Huang (Love Weaves Through A Millennium). The hero’s good friend who meets Lin Wei Ling (Xu Lu) and his stepsister (Rachel Mao) at Yale University. He harbors a crush on Wei Ling for the longest time.

Such a scandalous position Missy!

Zhang Jun Ning. In many projects before. One of them being Love Is So beautiful with Yuan Shan Shan. He plays director under our hero. Sincere and hard-working.

Derek Zhang Xuan Rui. A new face, he’s in the upcoming modern drama Stay With Me with Joe Chen and Nick Wang. His character is described as the helpful assistant to our hero, offering wisdom and humor in the group of friends. So happy he’s not caught in the already complicated love square.

A Preview of the new F4 Bromance:

Directed and co-written by Catherine Tsang (Off Pedder, Best Selling Secrets) with two other writers, melo drama Be With You has 44 episodes.