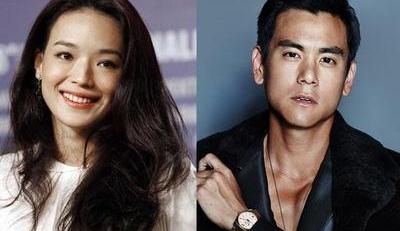 HEHE! The plural form doesn’t work out but you can just think of having multiple Shu Qis in your life. Based on the novel, Queen Stain, written by Luo Luo, The Last Women Standing follows three spinsters as they deal with love, marriage, and family to find their spot in the world and become successful modern women. Vague? Very much so! Leading the bunch is Shu Qi and she’s chased by a younger man – her subordinate in the form of glorious abs and youthful face, Eddie Peng. The two stars previously collaborated in 2012’s Love.

She looks awesome with red lipstick on. 🙂

I take the train to work everyday but I don’t see no Eddie-lookalike anywhere!

Not a lot of Eddie in the stills or trailer so have a look at his August’s edition of Men’s Uno! So handsome.

The Last Women Standing plans to hit theaters in November. There are several rumors of Eddie’s next project – one is a drama remake of Chinese Ghost Story with Liu Shi Shi, and the other being the male lead for Liu Yi Fei’s Three Lives Three Worlds, Ten Miles of Peach Blossoms. BUT ME, I’m hoping that he would act as one of the generals in Li Ying’s female general drama. What does a girl gotta do??