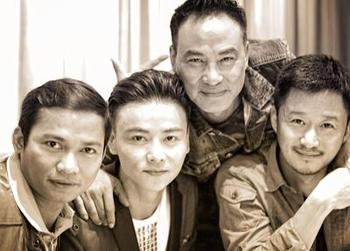 YES! Real men fighting! Not your skinny lads wearing rock clothing and throwing around cute punches to show off to the ladies. 😉 And what a mix of artists too, not your usual serve of same crew. The biggest surprise is Ong Bak star, Tony Jaa, starring in his first Hong Kong film and leading the grown up men – Louis Koo (Triumph in the Skies), Wu Jing (SPL: Sha Po Lang), Simon Yam (The Midnight After, Sara), and Max Zhang (The Grandmaster) in a fight for their lives. Honestly, these actors are drama actors that I used to love in dramaland, when they were younger and had much less muscles. =P

Jacky Wu Jing. Aww. I will always remember him as the cute, eager boy in dramas back in the days. Loved him in A Chinese Ghost Story and Legend of Dagger Li.

Max Zhang, Ada Choi’s charming husband, as the villain. He too started out in dramaland and my favorite role of his was in Paradise (Legend of the Magic Mirror).

Simon Yam. The Vampire King we all knew and loved…and hated to some extent. =D