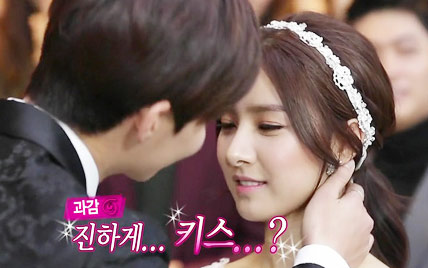 So did Jae Rim and So Eun kiss on their wedding day? DUN. DUN. DUN.

Love this episode especially how Jae Rim comes to his wife’s rescue again and again. So Eun keeps up with his affectionate level as well.

Our lovely couple walking down the white carpet to the altar. How sweet and beautiful they look in each other’s company. Jae Rim cannot wipe the smile off of his face.

Time to exchange looks for 3 seconds. Silly Jae Rim pulls So Eun in real close to tease her.

Looking at each other’s face seriously. Love how in the background you can see the boys going goo-goo over Jae Rim’s intense staring at his wife. Don’t get jealous boys, when you’re in love, that’s apparently what people do!

So Eun turns away first because you know there might be a hole drilled in her brain soon if he keeps it up.

A wedding declaration from Jae Rim. If he does something naughty, she’s allowed to hit him? I don’t understand this part but Jae Rim replies in English, “Yes. My queen.” Everyone chuckles.

A special guest from the We Got Married’s MC panel, Eric Nam makes an appearance to sing the couple a song. Oh boy. This is totally a surprise for me. Did not know he sings so well and with such oozing confidence. Someone, quickly tell me, is he SINGLE? 😉

Yo Jae Rim, look at the performer! He’s singing a song for you guys! I know So Eun is pretty! Look at her later!

Well, if you guys are just gonna be this cute, then hell with the performance. Lol.

Now it’s time for the main MAN of the day to fulfill So Eun’s wish. Dance for her on their wedding day. Before that, he reads out loud a letter he personally wrote, which is another cartload of cheese with a dash of romantic poetry. The wedding MC cracks me up when he asks, “Are the guests wearing seat belts?” LOL.

So Eun’s hands are curling up at the cheesiness of his letter. ^_^

Jae Rim looks up at So Eun when he says the last line, “To you who captured my heart, being with you….24 hours is not enough.” D’AWWWWWWWWWWWWWWWWWWWWWW!!! I CAN’T TAKE THIS!! SONG JAE RIM!!

And now he dances to Sunmi’s “24 hours.” How appropriate. SO CUTE.

My first favorite part of the dance is when he lifts his head and looks seductively at So Eun.

Second favorite part is the butt shake which he does so cheekily with his perfect apple BUM!!! LOL!!

The embarrassed groom and his cheering bride.

A FAKE-OUT KISS. Man, I was rooting so hard behind my computer that something might have broken. It’s okay. I will wait until the day they’re truly ready for that anticipated steamy kiss.

Eating time. The girls saying how proud So Eun was of her husband that she kept raising thumb-ups during his performance and then she adds, “It was for his butt!” Jae Rim: “You used to hate men’s butts but now you like them? EUNNNNNGG, so devious.” I love when he does that EUNNNGG sound.

The guests ask what they like about each other.

Jae Rim: “I like how she looks from the outside but it’s also because we are a great match.”
So Eun: “He tries hard in everything.”
Jae Rim: “Then you have to work hard to accept them all!”
So Eun: “I do!”

Jae Rim then mimics her rigid reaction when the PD suggested a kiss, which gets her all ruffled up. She tries to play it cool but before she can do anything, he swoops in for another…fake kiss. Dude! Don’t get my hopes up.

In comes WGM’s event host in a golden tux. Hwang Jae Sung. When he asks them how it feels to see him in person, So Eun is stumped for an answer. Jae Sung: “Am I ugly?” Jae Rim flies to her rescue by covering her eyes, “Don’t look at such person.” hehe.

They’re so touchy touchy today. The married couple will be playing games today and if they earn 7 hearts, they win flight tickets to somewhere. YESHHHHHHHHHHHHH!!

First test to see how well they cooperate in singing. I love you both dearly and you know that, but singing isn’t your talent, puppies. Lol.

Second test. To see how much So Eun loves Jae Rim. They bring out a fish to slap Jae Rim’s feet while So Eun does the requested tasks. If she fails, the groom earns a smack at the bottom of his feet. AHA! I have seen this in Korean dramas before. Jae Rim thinks that by breaking one, he doesn’t have to get hit but Eric Nam brings out a back-up fish. hehe.

First task: Doing aegyo. So Eun does this wink + shooting fingers to the flat faces of the audience. Tough crowd. Lol.

The second time, she does the same thing but adding sweetly, “Baby, I love you,” and gets everyone smiling and clapping, finally.

The groom is happy. 😀

2nd Task: So Eun’s dancing. Let’s just say that she matches Jae Rim very well in terms of skills. ^_^ She dances to the beats and does these pulling strings hand movements which triggers the groom’s hormones and he starts to butt-hop his way to her. LOL. Crazy kid.

The guests all raise their spoon for points except for Kang Joon and he explains that they should show more affection and cuteness. The MC challenges him to provide an example. He does but it’s the typical idol poses. Fail. hahah.

3rd Task: Jae Rim will do the task first. Finding his bride’s hand in the sea of four hands. OMG! My friend did the same test on her wedding but she totally cheated because she gripped her husband’s hand so hard he knew it was hers. LOL.

I know Jae Rim wouldn’t have problems with this test. He’s so meticulous and observant. He eliminates Lady #1 instantly because of her moist hand, and Lady #4 because of her plump hand, leaving only Lady #2 and Lady #3 (So Eun).

When he holds the ladies’ hands once again at the same time, he smiles knowingly, “So Eun has cold hands, ” and pulls his lovely bride towards him while taking off his eye mask to confirm his decision. That is hot.

Their little hug at the end KILLS ME. It’s so intimate and pretty. Please hug more. 🙂

Next week, So Eun has to pass her test of finding Jae Rim through touching the men’s adam apples. HAHA.

Is it me but this episode felt so short?! AHHHHHHHHHHHHHH!!