This episode cracks me up and this is me not understanding much. The cast sizzle with chemistry and jokes and new games! They have been repeating many games from Running Man, so I’m so glad that the PD decided to try out new games to great results and great pains. We love seeing people in pain.

All about the Queens. Angela is one and the two other ladies are guests. The shorter girl is Evonne Lin, and we have seen her in episode 2, coupled with Jerry and they matched so well. The tall girl with long hair is model-turned-actress Lynn Hung. One male guest to take Wong Cho Lam’s place for today’s episode is Shen Ling.

I was in stitches after this segment of Whack-A-Thief. The queen from each team stands in the center with a blow-up hammer and gets to whack the other team members if they dare lay hands on her corn. So funny.

Evonne is a hoot to watch. She’s so fierce and unafraid of pounding the other ladies. XD

Lynn is so tall so she doesn’t need to hop like Angela to get the corn. Here she is casually showing off a model’s advantages. Angela is rightfully miffed. Cutely though. 🙂 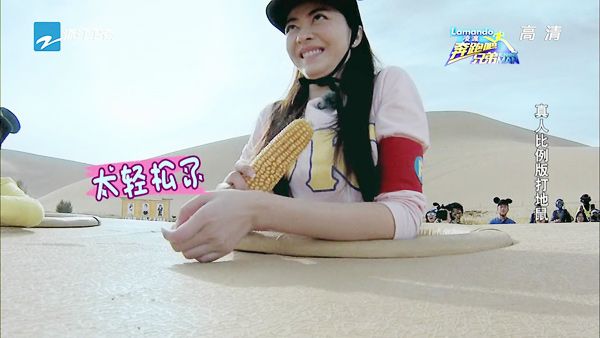 Evonne’s teammates, Michael and Jerry, enjoying the whole scene before them.

Bao Qiang (here on out to be called Bao Bao) is freakin adorable!

Angela singing her version of improvised lyrics to “The Little Apple” by Chopstick Brothers. This song tickles me. But a closer look at the music video tells us a sad story between the couple!

Because Jerry is behind Angela’s back, she doesn’t pay attention to him much, and he is like a happy bunny gathering corns. Until Ryan and Bao Bao calls for her attention.

GIFS! I’m still laughing!! Imagine the Korean Team playing this and Kwang Soo having the most fun whacking Kim Jong Kook. Or Sparta taking off his head with one whiff. LOL.

What did I say, Evonne doesn’t play around. Angela’s face when she gets whacked! 😀

The third game that they play is fun but looks so exhausting for the other teams because they have to generate the waves/bumpy obstacles with their own legs! Yikes, poor muscles!

The last game – nametag ripping with the men blindfolded and taking turns to carry their queen. Angela puts on an impressive fight when Evonne and Lynn team up on her. It’s intense, just look at Michael’s face. And poor the guys, subjected to the girls’ unintentional hand slaps. Lol.

Angela needs to be faster and more tactical when her remaining opponent (Lynn) has longer arms and hence reaches for her back more easily.

But it’s a cute ending nonetheless when everyone hugs it out. 🙂 Deng Chao’s proud face!