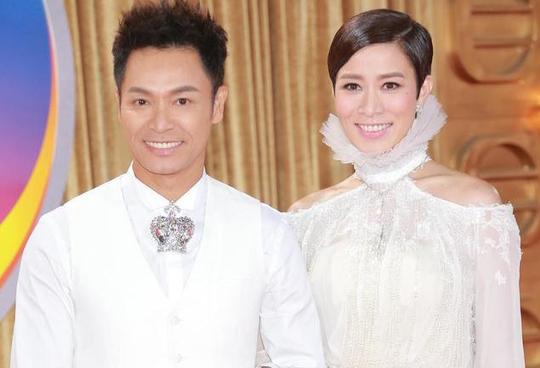 Roger Kwok (Best Actor) and Charmaine Sheh (Best Actress, Favorite Female Character) arrive together in full white. Roger has impeccable fashion sense tonight. Love love that the sparkle/details on his shoulders are of his two kids. He looks like a dashing prince. Charmaine, I love you, but that upwards fan design is a bit distracting and restrictive. It doesn’t help that I recently finished Juristic Park 1 and your dress reminds me of this one scene….

His million-watt-full-upper-teeth smile. 🙂 His winning reception is well-supported and he hugs basically everyone seated in the first row.

I thought the ladies and general reception is a bit cold when Charmaine is announced Best Actress. Most of the ladies remain seated and none of the guys walk over for a quick hug. Such a drastic difference to her win in 2006.

This is a nice captured moment when the ladies show some bonding.

Best Supporting Acting Awards go to Ram Chiang and Josie Ho. I did not expect Ram to win at all. My votes went to Power Chan. That man is so overlooked it’s driving me mad. I watched Ghost Dragon of Cold Mountain and fell in love with his character. Not to mention, he got to repeat his epic Phoenix line from The Confidant in a totally different tone (he played an eunuch in The Confidant.) Still, Ram Chiang has worked his butt off for TVB for years and he’s a great actor nonetheless. His win is quite emotional and receives loud cheers from all.

Josie Ho wins for her performance in Tomorrow is Another Day. Nope, I did not finish that drama because…well….when I found out how the main couple got together… I was genuinely pushed away. The age difference didn’t creep me out but the fact that the hero raised her and stuff. BURHHHHH. Here she is in the arms of TVB’s tallest and rising star, Vincent Wong. This man will be big one day. Amazing acting chops. He looked better last year and she looks quite edgy and ready to hit the club! Wrong show!

Benz Hui wins My Favorite Male Character for his great performance in Line Walker. He arrives with Elena Kong. A rather safe dress choice for Elena.

Charmaine hugging Benz for his win. The papa-daughter duo in Line Walker. His emotional face. Aww.

Raymond Wong and Nancy Wu. Love the reflecting glass design on Nancy’s shimmering dress. Very sophisticated. I wish her talents would be recognized soon! Raymond doesn’t look well put together. But he looks healthy, which is important for someone who recently fell ill.

Kate Tsui in a very familiar navy-hugging dress with Him Law as eye-candy. I don’t understand his style but he oozes confidence and it works to his favor.

The mopey couple in Sammy Sum and Sharon Chan. While Sharon is not the best actress, I absolutely embrace her joy and enthusiasm at awards shows. She lifts the somewhat gloomy atmosphere with her supportive nature for all the winners! Sammy, your grandpa is old, stop stealing his jackets!

Kenny Wong guiding bubbly Eliza Sam. The dress doesn’t give Eliza a great advantage but her side-swept hair transforms the girl-next-door to woman-next-door.

Edwin Siu and Natalie Tong. I LOVE HER DRESS!! So elegant and classy. Only thing is it blends in with her skin tone. It would be an eye-catcher if it was darker or paired with someone with darker skin tone.

Another body-hugging dress on Tavia Yeung with a bare back as well. Quite like Ruco Chan‘s sweater and plain white dress shirt underneath, though the pants is alarming. The hat I can take because I like beanies. But it is too casual for an awards ceremony.

Wayne Lai with a bowtie leading Louisa So. I like the mix of colors on Louisa’s dress but it reminds me too much of my Christmas wrapping paper. 😛

Kristal Tin and Kenneth Ma. Interesting pair-up. Both have different looks to their real age. She has some wicked cool hairstyle but I’m embarrassed by the short inner black shorts. Kenneth looks great.

Aww they’re so cute. I can’t critique full-blown cuteness in Raymond Cho and Selena Li. Let me tell you, Raymond is defying age. Look at his face. You believe he’s approaching 50 in 10 months?

TVB female leads. Seems like the higher ranked you are, the less access you have to colored gowns? 😛 My gosh!

hahaha! So funny, who arranged tiny Wong Cho Lam RIGHT next to Vincent Wong? He towers over everyone!