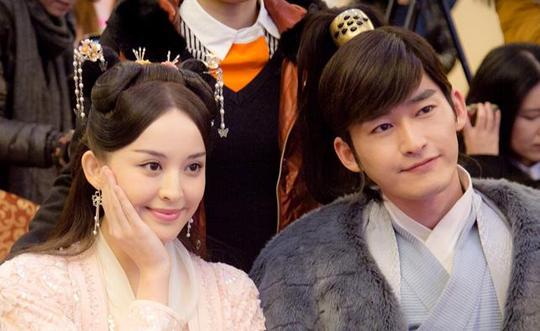 This drama was first mentioned in my batch of entertainment news here. The production held a press conference today and revealed a surge of first stills, giving us a look at Zhang Han‘s costumes for his good and evil character, controlled by the said forces of nature. He plays a prince/king who is abandoned in fear of causing the death of his own father and another mysterious character. It’s a fantasy type of drama where legends and mythical creatures play a huge role in the outcome of one’s life. I’m more interested in the supporting leads to be honest. Zhang Han has yet to connect with me as an actor.

His evil side. Nothing screams evil better than eyeliner. 😛

It’s great that these posters come with labeled name so I don’t have to crack my brain.

Kenny Kwan is taking part in many Chinese productions lately. Good for him!

Hello there trouble-maker Wu Lei (English name = Leo). You can watch him as Little Yang Guo in Romance of the Condor Heroes 2014. He was born in in 1999! A year younger than my third brother….

Ooohhh. I love her whole look, especially the beautiful headset. What a name she has! Lan Ying Ying (English name = Lyric)

The model of this production. Vengo Gao, currently pulling double duty for this and Destined to Love You.

The Classic of Mountains and Seas plans to have 30 episodes.