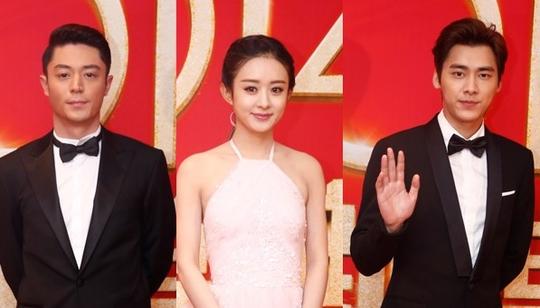 Lol. Just another shallow excuse to post pretty pictures. You aren’t tired of them right? I like this one since most of my favorite celebrities were there. hehe ^.^ The full show is not out yet so I can only drool over the pictures. Apparently, all of my favorites perform/dance to something that night. EEEEEE!!! =D

Let’s start with Zhao Li Ying. She arrived in a light pink gown. I like the bottom half but the top seems too intimate/personal… like those ancient bra/undershirts layer. She performed an opening song with William Chan.

His style is all over the place. A SKIRT? Dude.

She later changed into this orange outfit and redid her hair. She looks adorable. She presented an award with Li Yi Feng. Ha! Remember how I wanted them to pair up? Someone is stalking this blog and making my wish come true. She and Yi Feng received the Popular Awards in Mainland China.

This is just too cute.

It cracks me up that he has the same look at every award show. LOL!

Wallace Chung. Waiting to break hearts in his upcoming modern drama, You’re My Sunshine. I don’t like this hair. His hair last year was much hotter!

He also sang a song.

Up close and personal. Nice skin!

Presenting an award to the most beloved tv series this year: Legend of the Ancient Sword. Li Yi Feng represented the filming crew to accept it and it’s cute how Wallace offered his arm to lead the young lad onstage. 😀

The other big crowd is Liu Shi Shi, Hu Ge, and Sun Yi Zhou. I really like her dress. Plus 10 points for being a different color. Hu Ge looks fabulous but that necklace seems priest-y. Lol.

Hu Ge receiving an award for being the most welcomed actor. (The names of these awards… *rolls eyes*)

Wallace Huo wearing a pair of pants that might be too short…. Ahum…

The real-life couple acting like they don’t know each other. LOOK AT THOSE NAUGHTY SMILES. LOL.

They might have arrived separately, but lo and behold, they sat together and he was possessive! Check out the videos below where they showed their ultimate intimacy.

Kimi Qiao sat next to Li Ying that night. She was in between Kimi and Wallace Huo. There’s a photo with Kimi taking a photo for Li Ying and Wallace with William Chan staring from the back. ha.

I like his striped suit. Stood out from the rest black tuxedos.

A Quick video of Li Ying and William’s interview.

Nicky Wu is really in love. You see the way his eye smile when he looked at Shi shi before going up to get his award?

That’s it! I really need to catch up with sleep. ~_~ Happy Friday!