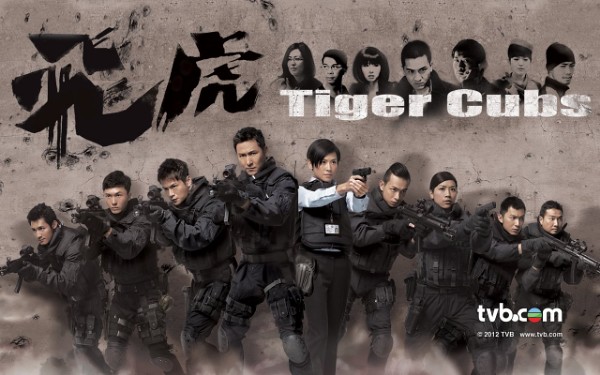 Yay! I like what I see already. Fast-paced and explosive (literally). If the title is not explicit already, this is Tvb promoting the next batch of potential young blood (ahem). We have Mr. Slicer cameo role, Mr. Tigger flashing his abs, and Mr. Pro leading the pack. There’s also bromance! Purfeeect!! 😉

The adrenaline rush begins immediately with the opening scene. Special Duties Unit (SDU)’s A Team leader, Chin Hon To (Joe Ma), and his elite male subordinates, split into two teams and enter the jewelry store on the 8th floor, where 4 robbers are located with 9 innocent bystanders bound and trapped in the conference room.

On the rooftop of the adjacent building, three snipers are scattered around the premise, ready to aim once the signal is given. Inside, the team successfully knocks down 3 robbers and releases the hostages, however, one last robber is missing, so the team moves down the hallway with great caution. Out comes the robber holding a hostage screaming for them to step back.

Under his heavy duty mask, Instructor Chin Hon To, commonly called Chin Sir, assesses the body language of the two, in police slang terms, referring to the hostage as the chick, while the robber is the eagle. Interestingly, the eagle, who has a hostage, is sweating bullets while the chick is calm. A closer look at the mirror behind them reveals that the chick has a gun pointed at the eagle’s back.

Assessment time is over. Chin Sir gives a coded message to the sniper situated outside that window, Chong Cheuk Yuen (Oscar Leung), “Eagle and the chick. The chick is the eagle!” Copy that. Cheuk Yuen’s bullet hits the chick’s flailing arm, ending the mission then and there. Satisfied, he winks triumphantly. Okay, I find that wink hot. Let me tell you another shocker, Oscar Leung is 33 this year. Yet he DOES NOT LOOK a day past 25. Omgosh. The fountain of youth, where are thou?

Afterwards, Chin Sir and the boys settle down in SDU lounge area, prepared to earn compliments from Leung Sir, their strict commander. Unfortunately, the man is hard to pleased, “What the hell happened today? What took you guys so long to complete the operation? There were only 4 robbers, but your whole team took more than a minute to rescue all the hostages.” Whoa, okay dude. Let me see your record-breaking profile then!

Before that, there’s a sexist moment when a female administrative support technician, So Man Keung (Mandy Wong), voices her admiration and regret to the team, wishing that she could join them on sight, but is turned down by the guys. Their reason: “No woman cop has ever passed the selection for SDU operation team.” She retorts, “What makes you think I can’t make it?” The guy answers without hesitation, “We just don’t think you can!”

With their armors now off, Chin Sir walks out the station with his good friend Cheuk Yuen, heading home to appease his worried mother, Pauline, and a proud ex-cop father, let’s just call him Chin Pa.

Chin Sir then returns to his own apartment, across from his parents’, and checks the video message left behind by his girlfriend, a flight attendant, Ting Wai Wai (Christine Kuo), as she relays that she won’t be home until next week. Since the door to his house is left open, Pauline naturally enters and nags about his carelessness and workaholic attitude, which is already making his girlfriend feels unappreciated. Chin Sir assures Pauline that he has everything planned out already, the proposal will happen next week upon her return!

Next morning, SDU’s A Team has two new, young recruits. One is a tiny muscled guy overflows with confidence (the SDU guys call it “arrogance”, they smirk), Yu Hok Lai (Him Law, right). The taller guy is Yau Chun Hin (Vincent Wong), less assured but level-headed.

Training time! And it’s a battle between the new and old blood. When Chun Hin is slightly behind the other team, Hok Lai gives him a pound on the chest as a small warning. During the whole process, Hok Lai is clearly the leading dog, but his partner Chun Hin continues to trail behind and eventually arrives last to the designated rooftop. Chin Sir warns Hok Lai of his lacking in partnership, discipline, and teamwork, “I paired you guys up so you could watch each other’s back! We don’t need any alpha hero in SDU!”

In the evening, the boys relax at a bar (owned by Chin Sir’s family), a tradition to welcome new recruits. The atmosphere is joyous so Chin Pa joins the gathering and begins retelling his heroic deeds when he was still a cop. Chin Sir’s expression immediately turns somber. He excuses himself to get more beers and chances upon a patrol police officer, Fu Chai (Kelvin Leung). It’s his first day at work and he thanks Chin Sir for the encouragement these past few years.

The young cop finds a car illegally parked in front of a van, blocking its exit, so he flips open his ticket book, but the driver returns and begs for mercy. Fu Chai continues to scan around the car, and when something amiss catches his eye, he orders the trunk to be searched. But the driver quickly knocks the cop to the floor, rendering him pained and defeated, struggling to move his fingers.

Here comes the big villain, a criminal named To Tin Yue, played by Kenneth Ma. The red head in his arm is Yiu Mei Ling (JJ Jia), his wife-in-crime. He places a finger to his lips, motioning the incapacitated cop to be quiet. Then he bends over, cups a hand over Fu Chai’s mouth, with the other free hand, he pulls out a knife and slices his neck. Poor boy! He’s so green! So new and inexperienced!

The death of policeman calls in the help of Inspector Chong Cheuk Wah (Jessica Hsuan), leader of the Organized Crime and Triad Bureau (OCTB). At the crime scene, we also learn that Cheuk Wah is Cheuk Yuen’s older sister.

Tracing the shoe print pattern on Fu Chai’s body, the OCTB team is able to narrow down their list of suspects. It’s a unique pattern of a discontinued sneaker.

Second round of battle. BAM! BANG! BOOM! BOOM! The OCTB teams up with SDU to surround the ruthless criminal Ah Yue and his gang members. Ah Yue raises his hands in surrender when he’s out of bullet. Smart dude, why fight and risk death when he knows the cops lack evidence to incriminate him? Aside from himself and his dear wife, the other 3 members have died, which equals to no witness.

Except…the faith he has in his wife’s loyalty backfires, she offers to stand witness as long as the court doesn’t charge against her. Oh, betrayal stings!

Alice: Stylish. First episode is all about the rush of epinephrine and the style (high-budget material is evident). If you’re craving for a short 60-minute movie, this is your deal. Mindless viewing, nothing too deep for the brain, a thrilling ride to boot. 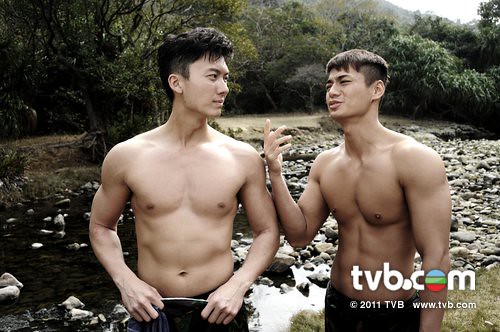 The guys. If I’m not wrong, Joe Ma is one of the tallest actors left in Tvb. He’s perfect for the role as the capable instructor, reeling the hot-headed guys. Vincent Wong looks tired, I was waiting to watch you (a soft spot for him after Gun Metal Grey)! Maybe his days as a new father exhausts all his energy. Him Law has potential. I just wish he was a tad bit taller so that he doesn’t look too chunky with the abs, especially when he’s paired up for bromance with Vincent and in constant arguments with Joe. The only other guy who is given enough screen time is Oscar Leung. I never found him adorable until this drama. His character is squishable in episode 2, how he cares for elder sister (changing alarm clocks, cooking with a broken ankle, consoling her) is so sweet! His trademark click of tongue, followed by a wink is smexy, just don’t overdo it.

For character development, episode 2 shows more depth into our calm and collected madam Cheuk Wah. Nothing new for Jessica as an actress because she’s used to play these professional roles. I wasn’t sure in episode 1, but having seen her repeated attempts in episode 2, it’s clear that Cheuk Wah hasn’t made it across the grieving stage for her dead ex-boyfriend yet. When she’s confronted in dangerous shoot-outs with the armed robbers, she becomes …suicidal? A perilous trait but fascinating to watch a cop’s inner struggle with death, like she wants to die on duty to compensate for the negligence towards her dead ex.