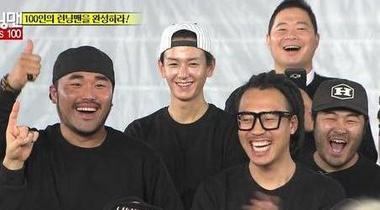 It’s been a long time since I felt the thrilling need to recap an episode of Running Man. I still watch them here and there because I like the cast and their interactions. But Episode 271 and 272 kicked the challenge up a notch for our team of tricksters and thinkers, requiring them not only to work together but tugging along 85 more guests to bring us three full hours of thrilling games, unmet challenges, and a whole lot of unexpected entertainment in every walk of life.

Warning: Lots of fangirling and upset emotions. I’m like 12 when my family is losing. XD

Some of my favorite guests below. The first guest, invited by Jae Suk, Lim Hyung Jun. He arrives so early! What a trooper!

Second guest, invited by Gary, DJ Pumpkin, who adorably asks, “Am I too unknown here?” Aww! He looks like a sweet pie, another version of Gary.

Hyun Joo Yup. A 6′ 5″ professional basketball player. OMG. He’s like a deep-rooted tree that doesn’t need to move much to bring terror!

More of Haha’s guests, his Reggae brother, Nuol, and Samba brother, San. I’m mesmerized by their hair. Looks real swag on them.

Trot singer, Ma Asung. He’s so funny! Everyone assumes he was a hip hop singer, but he surprises all with his quick humor. While he’s singing, Jae Suk has the perfect timing to ask what’s the title of his song, and he stops singing immediately and answers calmly, “Deep Affections,” causing a round of laughter. Lol. I wish him lots of success. 2 minutes on Running Man is all you need!!

Actor Kim Kwang Gyo. Rushing to Running Man because he thought he could be a regular. He’s so adorable with the tropical dance. XD

Actor Im Joo Hwan, invited by Giraffe. You’re such a sweet soul and looks like an innocent child here!! Ki Bang is also there, and the only one missing from the circle of friends is Jo In Sung. He continues to prank Kwang soo. Hmphs!

Another one of Haha’s Hongdae crew, King Kong. LOL. What a name. His smile is too infectious, showing off all of his teeth in one flash. =D

Singer M. Tyson. They joke that he looks like Lee Jung, but I think he could be the Asian Genie. XD

Im Seul Long as Ji Hyo’s sole guest. Awww. He’s so adorable, came running at Noona’s call. You have one point over Lee Dong Wook, kid! =) He looks so handsome without all the gel in his hair.

Actor Yoon Park. Though he is Suk Jin’s guest, he was partner with Ji Hyo in one episode.

Comedian Park Na Rae gives the boys a little scare when she just puts on her shorts right then and there to do a crazy dance. I laugh so hard when some of the guys in the back seats crank their necks to see. Sit down, pervs! 😛

Is that the new joint-breaking dance??!! 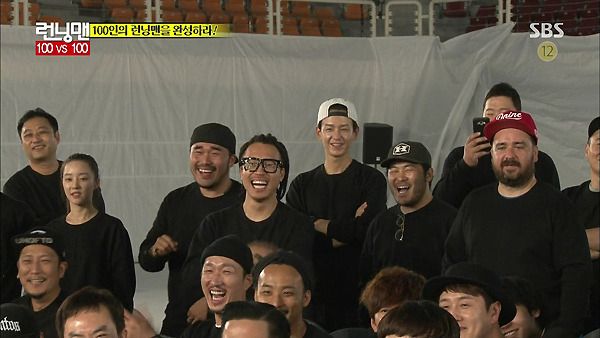 Aww, Jong Kook invited the boyband, Got7. Sorry guys, I only recognize Jackson from Roommate. Forgive me as I called them by their hair color. Oh Krap…. same hair colors…. XD They should have invited 2PM too! But Jackson and another member, Mark, performs a few dance tricks and even compete with two comedians – Lee Sang Min and Lee Sang Ho. That in the air back flip is so cool, the kid Mark probably weighs about 10 pounds, clothes and all.

40 VS 40 Game is rolling a roll of toilet paper across the floor and making sure it lands in the marked “safe” area. Where else would you see top stars, singers, wrestlers holding toilet papers? XD Running Man wins and is able to reduce the number of Red Team down by 10. Whew~ 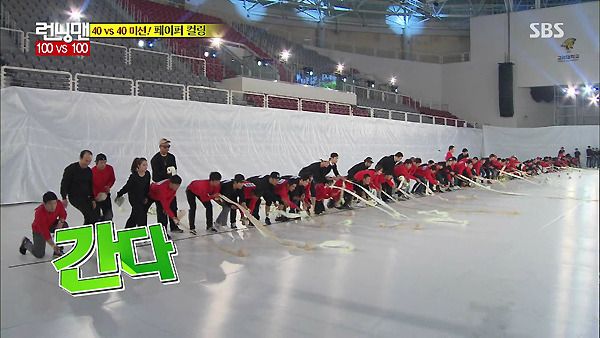 Gary’s guest, B-boy Ducky impresses me tremendously. While he looks quite older than the competing member (JB) from Got7, he’s very nimble and flexible.

Tim! He used to be Love Letter and Running Man. He looks so much paler and bulkier too! Turns out he’s gym buddy with Sparta!

Singer Wax with a lovely voice.

60 VS 60 Game was my favorite in middle school because I was the queen of it! Dodge ball! Because of my petite size and fast twigs. It’s very thrilling to watch 60 people go at it. I could watch this segment FOREVER. I lost my voice too at some point of this whole segment.

After the whistle is blown, look at this cutie from the Red Team crouching over. LOL! He’s eliminated of course. Aww, one shot from the Red Team eliminates Ma Asung and King Kong!! How dare you?!! They’re my favorites!! But if you listen closely, you can hear Jae Suk asking if Asung was okay since he got hit on the head. YESH! Make friends with JAE SUK!!

Okay ya’ll, Yoon Park just became so attractive when he catches the ball between the Red Team passes and acts like he didn’t do much. hehe.

Then of course, I die when another member tries to replicate the cool mid-air catch but the ball bounces out of his chest and he doesn’t know where it went. LOL.

Look at hyper Joo Hwan hopping across the battlefield like a kangaroo after he catches the ball (and saves UEE from elimination).

Using his whole body, Hyung Jun gently taps the ball back to his teammates in the corner. So classy.

OMG. This part is so hilarious. A young boy throws the ball at Mr. Tree and he catches it swiftly. He does a scare tactic by brandishing the ball and scares the beejeezus out of the kid as he stumbles to the floor in horror. LOL!!

It’s getting intense now! 9 VS 3! Running Man is winning!! YESH!! I know they must be tired but I didn’t want the game to end.

Lee Jung and DJ Pumpkin share a hug as the latter saves the former from elimination by catching the ball before it lands. =D

And Team Running Man wins this battle!! OMGosh! I’m so proud of my fellow oldies, they never give up!! X)

Kwang Hee in his mustard-colored shirt and being delusional about being the only “star” invited. LOL. I luff this kid!

The final count before the three rounds of name-tag ripping competition. Red Team: 80, Black Team: 92. Even with the larger number, it’s impossible for Running Man team to win, I think. Each of the heroes invited are twice or three times bigger and stronger. Plus, they train almost every day. This is like civilians vs the military soldiers. But the effort they put into every round is commendable.

1st Round. Red team is already gaining the upper hand with their aggressive and confident straight approach while our Black Team shrinks!

Good thing we have some young bloods in the house and they aggregate together to separate and tackle one at a time. But it’s not a great scene, 6 men vs 1 red man. That’s how strong these trained heroes are.

OMG. My poor Giraffe!! He’s so tall in the sea of Red with no one to look out for his nametag!! Yoon Park is also another casualty of group attack. 🙁 But I feel great that at least middle aged men like Hyung Jun and Kwang Gyo go down with at least one elimination in their hands. ^_^

Legend Chang Jung Koo attacking No Ji Sim who is three times his size and KNOCKS HIM OVER. XD

Then the camera cuts to this lady who acts like she’s possessed or something, looking around and waving her arms at invisible enemies. Ladies, help your team mates! Lol.

Noona Sung Mi sneak-attacks the Youngins from Red Team. HAHAHA. Her plan backfires though because another person has their eyes one her every move. Tim tries to warn her but he’s quiet and a little too late. heh.

Running Man Team getting trapped. I want to cryyyyyyyy!!

Ji Hyo, the last remaining member of First round held down by three of Red Team. Are you boys PROUD!!?? Yes, I’m upset. Lol. I love how they focus on Gary’s face after her elimination as if saying, he’s gonna get revenge for his lady!! ^______^!!

Second round is led by Sparta! Gary! Mr. Tree (Hyun Joo Yup)! Joon! Comprising of 31 members, it’s their strongest group. Look at them gathering around Kookie to listen to his tactics. Get them boys and girls! Get those red pants off!!

Our Kookie suggests a fair 1 vs 1 round! BALLS! Of course, Red Team picks their biggest boy, the same one who enters with only a speedo on earlier. XD So nerve-wracking. That kid is strong but not fast enough and gets ripped first. I’m worried, he pulls down Sparta when he falls backward. Sigh, our Sparta is gonna get hurt again.

Red Team suggests 2 Vs 2. Jong Kook picks one of his friends, Park Geun Sik, and I’m like nooooooooooooo, pick Gary or at least someone with unrivaled strength like Mr. Tree!! Kookie spends so much watching out for his friend that he isn’t focused on eliminating his opponent, leaving him defenseless against two very very strong men at the end. =( I was gonna cry ya!!

Love the blood-pumping music they play as the Black team sticks together and hounds on the Red team with like 10 to 1. LOL!

Yes! This is good formation! Trap them! Make them feel constricted and small! I’m so evil right now, don’t mind me. 😛 Running Man wins second round!! At least they are not going down without a fight!

Third Round. I can’t look! Red Team saves their strongest players for this round and our Black Team looks…not very well-fed. LOL. Look at their stance! Confident and spread out while Running Man team is the opposite. Frightening sight, isn’t it?

Running Man is clumping together! Bad! Bad! Separate into small teams and keep tab on each other’s back!

I can’t watch this anymore. They are totally slaughtering my lovely people here!! WAHHH!!

Then you see this kid running around the stadium by himself as the last standing member (Seung Kwan?). Are you the one I spotted earlier who ran away instead of helping your people, kiddo? Ai ya. But doesn’t he look like Yoon Shi Yoon? They suggest a 1 VS 1 battle and he goes down in the hands of gold medalist, Lee Won Hee. That’s like an honor.

Amazing two episodes. I rewatch them several times while checking my rising blood pressure. Lol. What it did establish is how amazing and smooth Jae Suk is as an MC and how he can talk FOREVER!! Dude, his voice never cracks? I love 99% of the guests and they are relatively unknown to me. Amazing group of friends!! Please come back! 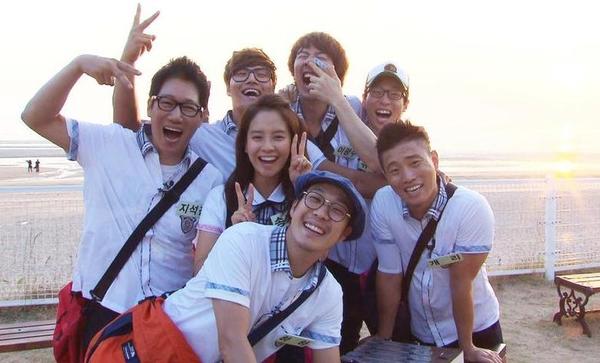