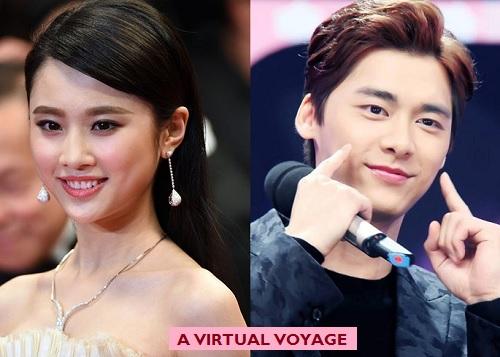 If you follow variety show, Happy Camp, you’ll recognize He Jiong as one of the show’s MCs, popular known as He Lao Shi to the audience. Many might not know this, but beside hosting, he’s also an actor, writer, singer and a professor of Arabic major. Tentatively named Gardenia In Blossom, the film marks his directorial debut. To prepare for his new adventure, he recently visited Thailand to scout for a shooting location at a university.

The male and female lead have been announced to be Li Yi Feng (The Lost Tomb, Legend of the Ancient Sword) and new face Zhang Hui Wen. We all know who Li Yi Feng is so let’s learn a few things about the newbie actress Miss Zhang. She appeared in Zhang Yimou’s Coming Home last year, playing the daughter of heavy hitters Gong Li and Chen Dao Ming. She reminds me of Zhou Dong Yu, who also got her big break from Director Zhang Yimou in Under the Hawthorn Tree. I did not watch Coming Home so no comments from me about her acting.

Some of her stills in Coming Home:

Ballet dancers have my respect for their pose and poise!

This is just beautiful.

Good friend Huang Lei (Phantom Lover) will take on the role of the movie’s producer, Wang Shuo (Yi Di Ji Mao) as the executive producer, and Peng Yu as the chief planner.

The film is in production and plans for a summer release.