It’s not that shocking to some fans who saw the ending miles away. Like me, bam bam! If you have seen What Happened in Bali, the endings of both dramas fit each other like siblings. The story might have been slightly acceptable in WHIB, but both story lines are equally torturing! Funny how the writer lured you all into this false sense of security by saying “The ending won’t be as bad as WHIB.” I can’t stop laughing. So her definition of not-as-bad is killing only one character? Mind-boggling. The story is supposed to be about fashion, with a bunch of talents being thrown together and how they struggle to get to the top! But now? They all fight to stoop to the bottomless depths of hell.

My Young Young didn’t end up together, but they love each other until the end. Next time, guys. Next time.

His confession? She didn’t read. Her last words? He didn’t hear. Tragic.

Young Gul decides to give up everything; his apartment, the factory, and even Ga Young to head somewhere far away. Ga Young wakes up and finds the necklace and lollipop placed near her. She appears confused, like she can’t connect what those things mean… Er, so what’s the significance of that jewelery writer? You stink!

Next day, Ga Young is called to Jae Hyuk’s office, where she finds him bruised up to a pulp, beaten by Dad again. Seriously, the whole cast should attend psychiatric help together after this show. I’m sure they suffer one way or the other from Post-Traumatic Stress Syndrome.

She feels sorry for him. But what can a girl do when her heart has always stored only one man?

A month later, elsewhere, Young Gul gathers his courage to write a letter to Ga Young. In it, he admits his wrong doings and attaches a plane ticket, urging her to find him in their special place (Apartment in New York?). He ends the letter with “I love you.”

I guess the writer has decided to shred whatever dignity Jae Hyuk has left because he steals the letter away from Ga Young’s mail box. He visits her, and finds her lying sprawled on the bed, ready for death to come by. This girl has no will to live after Young Gul’s disappearance. What a dumb girl, but whatever, give her the letter you jerk face!

Instead he suggests they go to the states together. What the crap?

They go to the states together and Jae Hyuk, the low being he’s become, books a hotel in which Young Gul is supposed to meet Ga Young for their reunion. That night, a switch nuzzles in Jae Hyuk’s brain and he decides to reveals the truth to her, confirming that Young Gul is indeed here in New York, “Do you want to meet him?” Dumb girl says no. I don’t get you. It’s the finale, have some spine please! When he leaves, her dam breaks and she cries. Over what? Your stupid decision? AHHHHHHHHHHHHHh!

Next morning, the sight of Ga Young exiting the hotel lights up Young Gul’s face, but the person who greets her at the entrance is Jae Hyuk, which casts a shadow over his face instantly. He’s supposed to meet her there, if she has ever received the letter.

Later in the evening, Young Gul treads towards the apartment where he and Ga Young lived together. Sitting on the steps, he breaks down, recalling their fleeting moments of happiness. Hmm, I notice that all my boys are expert at crying, (Kim Soo Hyun, Yoo Ah In). Dang you guys.

He drinks himself silly and staggers back to the hotel. Young Gul then spontaneously decides to soak himself in the pool, all glory and furry (?!!) in white. Oh gosh, you drama queen!

And he calls her. 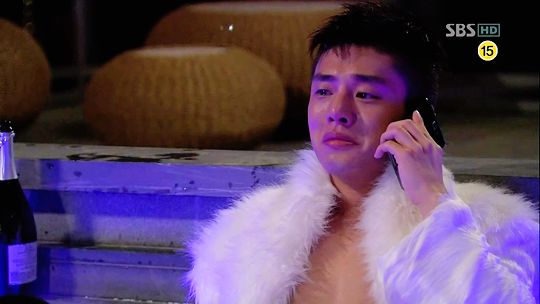 Ga Young pauses, taking her sweet time to count the bills after this horror show is over. Unfortunately, she can’t see what’s happening on the rooftop of his hotel. A man looms by his side, carrying a gun.

Too bad dumb girl, he’s dead already. So in the end, this whole drama remains a mess consistently throughout the course of two months? That’s an accomplishment of the year! How did the writers score such brilliant young actors? WHY did they accept such scripts? Oh, the world may never know.

The character development is the worst I have seen. Just when you think they’re gonna learn from their mistakes and change for the better, they go right back to square one!