How’s Taiwanese dramaland doing these days? Any good ones? The upcoming modern youth drama, Attention Love (稍息立正我爱你) reunites Ti Amo Chocolate‘s costars Joanne Tseng and Wang Zi as the main OTP. They were betrothed to each other as babies and Wang Zi plays a broody boy returning back to Taiwan after living in Japan. With his father’s death, he goes and lives with Joanne’s family and attends the same high school as her. She’s a somewhat of a badass leader at school, known affectionately as Zhong Ge (Zhong big brother). Second lead couple goes to Spexial’s Riley Wang Yi Lun (Long For You) and Guo Shu Yao (The Teenage Pyschic). I haven’t seen much of the leads’ acting to give a statement but the trailer looks quite cute and harmless.

END_OF_DOCUMENT_TOKEN_TO_BE_REPLACED

If you’re a big fan of Jia Qing, you will be dancing with this news. Her current drama, The Four, premieres two weeks ago and now her modern drama, The Wife’s Lies, touted as the remake of Korean hit tv series in 2012, My Daughter Seo Young, starring Lee Bo Young and Lee Sang Yoon, is set to follow Cruel Romance time slot on March 29th. The Korean version has 50 episodes (it’s a weekend series) but knowing China’s penchant for long-running series, they added two extra episodes. I did not watch the original version so no idea how good it is… Feel free to chime in.

END_OF_DOCUMENT_TOKEN_TO_BE_REPLACED 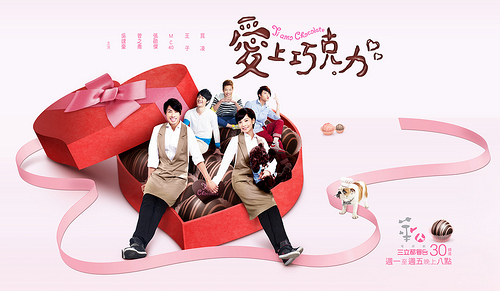 Well, here’s something for Tdrama fans to look forward to next week on April 3rd. In Ti Amo Chocolate, Vanness Wu plays a rich businessman who has boundless love for chocolates and sets out to explore. The female lead is played by Joanne Tseng, and the supporting cast includes Wang Zi (Prince? Seriously?) and Hannah Quinlivan (Jay Chou’s rumor flame). Interesting cast choices…Not thrilled nor disappointed but chocolate never fails to lift up a gloomy day. So Weee~