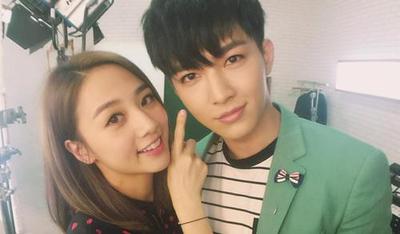 After Wallace Huo and Hu Ge’s 5-year promise sprouted a new romance in the former’s life, I’m not surprised Promises of Wedding Bells is playing out in more ways than one. As mentioned before, Gui Gui is a member of the variety show, Crime Scene (明星大侦探), and the team recently reunited her with former co-star Aaron Yan, dressing them up as a republican couple. These two are so touchy-touchy!! In the brief promo clip for the another show, Idol Online (偶像萬萬碎), Aaron advises Gui Gui to get married to a mature guy who is at least 30, and when she inquires about him, he suggests a promise to marry her if she’s still unmarried at age 30. To further fan the romantic seed, he wonders where she wants to get married? Greece? Nope. She wants to go to Finland to see the Northern Lights. You two. Short clips of both shows are included after the jump (or after my imaginary storyline of them in a typical romcom.)