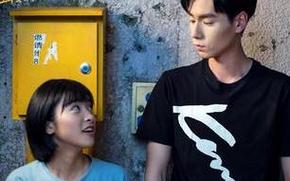 Awwww. The height difference is so freakin cute! Modern youth cdrama A Love So Beautiful (致我们单纯的小美好) stars rookie actors, Hu Yi Tian and Shen Yue, and is based on the novel written by Zhao Gan Gan. The story reminds me a lot of Taiwanese drama It Started With A Kiss, the tall smart guy in school having a small cute girl chasing after him, except she isn’t as frustratingly dimmed as the latter heroine; he later becomes a doctor and she a Comics artist. It’s very similar to the thousands of youth dramas out there so I’m interested to see how they will make this fresh and heart-warming, especially since the writer behind the successful With You worked on the scripts with five other cohorts. =D

Rookie actor Hu Yi Tian was in Zheng Shuang’s Rush To the Dead Summer. Born in 1993.

Ohhh Tall guy has a rival in muscular guy? This is Gao Zhi Ting.

Directed by Yang Long (Advance Bravely) and written by novel author plus Wu Tong (With You), Duan Yu Yue, Yu Ku, Zhou Chu Cen, and Wang Yan Bei (The Empress of China), A Love So Beautiful hopes to broadcast in September with 24 episodes. YAY! It’s short!