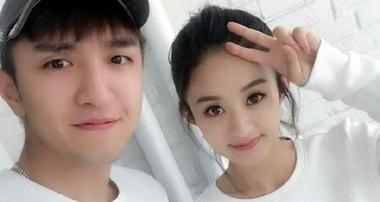 Well, well, well. It’s been rumored for weeks and now it’s official! On the heels of Jin Han (Princess Wei Young, Princess Agents) confirming his joining of Zhao Li Ying studio, here he’s given a chance at first lead with lady Boss Li Ying in novel-to-drama adaptation of Ding Mo’s Our Glamorous Time (你和我的倾城时光). It is too bad Jerry Yan didn’t take the lead role but I guess Li Ying has obligation to her people now. heh. I haven’t read the novel yet but a quick scope reveals the backdrop set in the business world with corporate battles. Our male lead returns home from the military to help his family from bankruptcy and is involved in a guaranteed sweet love story with our strong yet feminine female lead.

How interesting to see Chu Qiao with Zhao Xi Feng in a modern setting together. I guess he’s reincarnated after being killed in Princess Agents. Lol.

Lol. Poor Jin Han still doesn’t have the aura of a leading actor yet, standing behind Li Ying and the rest of the crew. XD Brave up, young one! ^_^ Grab this chance and run with it!

Jin Han with Zhao Li Ying and Lin Geng Xin On His Birthday: