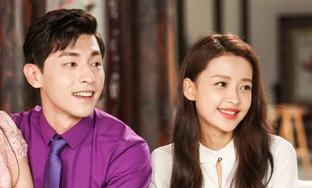 Awwwwww yea! Black horse for the win! Loved it when a drama comes out of the corner and takes the lead in the ratings game, surpassing dramas with endless and heavier promotions. Because of You (因为遇见你) stars relatively new faces in Sun Yi and Deng Lun, also known as the alternative pair in modern youth drama, 15 Years of Migratory Birds. On its last episode (46), it made a record of 3.046, becoming the first drama of 2017 to break the 3 benchmark. It has an average rating of 1.93 for its entire run, leaving everyone else biting the dust.

They look gorgeous in traditional wedding gowns. Now that it’s over, I will try to watch it! =D