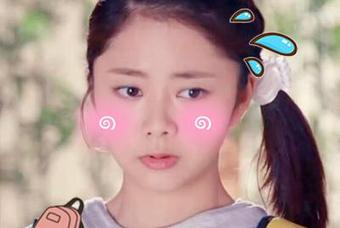 HOHOHO! I believe that in an actress’ career, she should play in her own harem at least once and this looks like the case for up-and-rising baby-faced beauty, Tan Song Yun, who took on the lovable best friend role in both seasons of Tornado Girl. Based on the novel of the same name written by Jiu Xiao Qi, My Mr. Mermaid (浪花一朵朵) is a sweet and funny love story about a reporter and a star swimmer. YES to ! I mean…sweetness and hilarity are much needed in a world where most novel writers enjoy torturing the lead couple. XD But yes, I do like my eye candy and this time, they are swimmers! Sport dramas!! I really need them! So rare in dramaland! Can’t gauge much on their physicality yet but I hope we don’t get frail flailing arms. LOL.

Our heroine, a reporter, played by Tan Song Yun. The new rookie in charge of following and reporting stories about the Annual Swimming Competition. Our hero, because of a mistake three years ago, is forbidden from swimming. In those three years, he studied hard and became a model student. While his best friend took home pride for China at the Olympic with bronze and gold medals, he buried himself in academics. When he finally returns, they are at different level of popularity, and when reporters swarm his best friend, he finds himself in an awkward but memorable interview with the rookie reporter, even gifting her a pair of goggles at the end. She returns the favor by giving him a boiled egg. LOL. Awww!

Dylan Xiong Zi Qi, our hero, from the band SpeXial.

Produced by Hunan, My Mr. Mermaid aims for a release in summer 2017. YAY! Perfect timing!