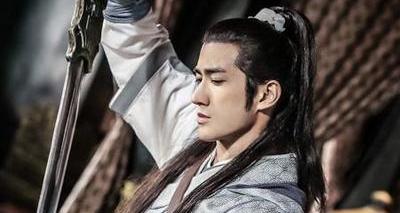 First posters are out for two period dramas that started filming last winter, which seemed like a long time ago. Lol.

One is the historical drama Rule The World and the other is based on video game, Gu Jian Qi Tan 2 or Legend of the Ancient Sword 2.

Maggie Chen Xin Yu as Lady Abahai, the fourth primary consort of Nurhaci, the Khan of the Later Jin dynasty.

Jing Gang Shan as Nurhaci, military commander. I did a double take, thought it was Kwong Wah. Oh my.

Second is the drama adaptation of RPG game of the same name, most popular known as Swords of Legends 2 aka Legend of the Ancient Sword 2 (古剑奇谭二), starring Fu Xin Bo, Ying Er, Aarif Rahman, and Dylan Kuo. The story structure is similar to part one, a bunch of youngsters gather together to find a mysterious sword to save the day (chicken-scratch storyline). Too many technical terms for me to translate. Lol.

Fu Xin Bo as our hero.

Ying Er as the heroine.

Aarif Rahman as a half-demon, half-human prince. He looks so pretty.

Dylan Kuo. Holy. I didn’t recognize his face at all. Did he borrow Ma Ke’s white wig for a time period? Lol.