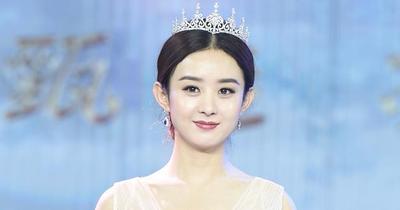 A press conference was held a few hours ago and the production crew of The Monkey King 3: The Land of Beauty (西游记·女儿国) posted on weibo to welcome your highness! She replied with “My beloved subjects, I have arrived!” Lol. This role is a big step in her film career and I really hope it does well, and even if it doesn’t (story-wise?), she has some significant exposure. Honestly, I’m really surprised at the confirmation because we all know that her name isn’t as big as other big Film actress, but then I remember a saying: everyone starts out small. From no name to big name! Without the baby steps, how can one’s name becomes a powerhouse in the years to come?

I want some colors! Some colors Li Ying! Hey stylist rarely sees eye-to-eye with me. Lol. (I know, I’m picky!). Uploaded the press conference clip below for those interested when she’s revealed as the female ruler. heh.

Director Zheng Bao Rui putting the crown on our girl.

Wen Ning is the writer. He’s so small! XD

Awww this picture is cute!