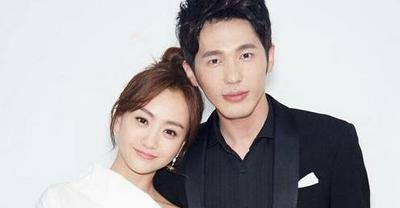 I anticipated the whole week for this event until the bomb dropped last night that Li Ying wouldn’t be able to attend because she needed to film an important scene for her movie, Ride the Winds Break the Waves, with Eddie and Deng Chao. Sigh….. Her manager went in her stead and she won Artist of the Year Award. Most of the attendees were Li Ying’s co-stars too! Good thing they have a good variety of stars to reel me back in. heh. The pretty!

Let’s begin with Grandpa William Chan! Would look so much hotter without the banana coat! Glasses make him look cute. 😀 He won Character of the Year award and also became Qiyi spokesperson/representative. There was a short time when he sat between Aaron and Tony, the big guns. Wooo ~

A little heart for his fans!

Zhou Dong Yu and Zhang Yi Shan together. I love that she loves colors!

She won Film Actress of the Year! Congrats!

Yi Shan took home the award for Actor with the most leap of the year? I’m thinking it means he took on various roles/challenges and showed huge improvement. Lol.

When she walks, her dress flutters in the back. Very royal.

Wang Zi Wen and Jia Nai Liang. They took home Breakthrough TV Actor of the Year. Their drama will be out next year!

Our Snail is looking sexy!

Sha JIE JIE!! Ma Ke and Ying Er for The Most Talked About TV Actor of the year. Lol.

Aww the two kiddos from webdrama With You. Tan Song Yun and Wang Li Xin. Potential TV Actor of the Year.

Dilraba Dilmurat. Errr… Not sure how to translate her award… Lol… Most powerful TV actor of the new generation?

Song Qian for Most Popular Actor. Love her messy ponytail!

Yang Shuo and Maggie Jiang. Performance of the Year award.

This woman has been glowing lately!

LOOKIE WHO!! I didn’t recognize our Fu Guan at all! The rivals in The Mystic Nine. Zhang Min En and Harry Hu Yun Hao. They, along with a few more, took home TV Newcomer Actor.

Couple of the Year. Yay! Memory Lost’s Yang Rong and Johnny Bai Yu. She said she robbed his first kiss in the drama. HA. I loved what he wore, I adored what she wore. Best Dressed Couple of the night for me!

A gentleman is always loved. Heee!