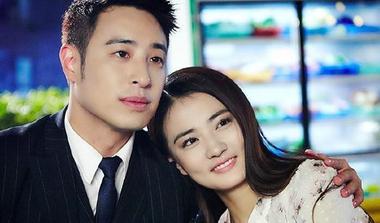 Don’t get fooled by the above photo. This is a straight-up melo drama. If wuxia, period, and modern rom-coms don’t fit your bill, here’s a melo for those itching to cry and pull out their hair this January. SAY WHAT? Yep. No breathing room at all. Be With You (不得不爱) is adapted from the novel Every Step Is Wrong, written by Lan Bai Se, the same author behind Loving Never Forgetting with Jerry Yan and Tong Li Ya. Wilber Pan and Xu Lu play our OTP and they are not nice people. *prays to my land lord that our female lead DOES actually inflict damage and pain*

The original translation I did last year of the novel: Our female lead, Lin Wei Ling (Xu Lu), had a crushing childhood: she lost her mother very young and lives with her father in a big, empty house, with servants. She usually dresses like a boy just to play with the other boys in her neighborhood. But after they learn of her gender – they no longer allow her into their group. Even though she’s treated like a pearl in her father’s hand, he works days and nights. Then one day, after waiting endlessly for him to show up at the parents’ meeting, she fumes and heads to his company. Just seconds before entering the revolving door, a thud pulls her attention back. Lying bloody on the hood of her family’s car is a man all too familiar. Blood pools and encircles around him, his eyes never leaving her face, as if staring straight into her innocent soul.

The tragedy takes away her father and her ability to talk. She’s left to be taken care by her father’s “friend”. He lives with his wife, a woman with a beautiful smile, and their young son, Hu Qian Yu (Wilber Pan). He torments her, not knowing that she’s actually a girl (WHAT??!!). On the day of her birthday, he hears her crying and singing the happy birthday song. Angry that she lied, he orders his minions to stomp on the poor girl’s cake; the cake that she had to break her piggy bank to buy (kids can be so cruel).

The day he finds out that she’s a girl – such a horrible scene – is when he and his friends beat her up at the tennis court and strips her down to…nothing. That is when she cries, her body shrinking numbly to hide the horror and the embarrassment. He feels bad but he’s more afraid of being found out by his parents so he threatens her not to tell his mother.

She returns to take back what is rightfully hers.

Lol. Behind-the-scene, Wilber is the one actually crying! XD

YES! Splash water at him! That jerk!

I hope he didn’t do what I think he did…

Rachel Mao Xiao Tong. She rocks all the hairstyles. 😉 The heroine’s best friend and the frenemy CEO’s illegitimate daughter (Denny’s half sister). She’s the total opposite from our heroine – bright and sunny, easy to persuade and pacify.

Rounding out the bromance is Zhang Jun Ning (on far right).