=======> ♦ New trailer for Candle In the Tomb with Jin Dong and Chen Qiao En. Air date has been changed to 12/19. Jane Zhang sings a haunted themesong for the webdrama.

Sneak peek of their look/costume in the movie.

=======> ♦ New stills for Journey to the West: Conquering the Demons 2 (西游伏妖篇) with Kris Wu, Lin Geng Xin, and Yao Chen. I swear they made the disciples look like demonic gangsters protecting Xuan Zang.

Kris Wu and Tan Jing sing a promotional themesong for the movie below.

Lu Han also sings “Let Me Stay By Your Side” for See You Tomorrow.

=======> ♦ Official MV for Nicholas Tse’s food movie, Cook Up A Storm, with many singers participating. Can you spot all of them?

=======> ♦ Another Jackie Chan‘s movie, Kung Fu Yoga (功夫瑜伽). Why does it feel like it’s Jackie’s dream to work with all of the EXO boys? Lol. Lay, Aarif Rahman, and Eric Tsang are among the cast members.

=======> ♦ Sina started a tradition not so long ago, every year they will pick a batch of actors and give them 2 minutes to act out a topic of interest that took place during the same year. They call it Beautiful Performances and this year has the theme of an important moment in life. Watch the video compilation below.

=======> ♦ First Four posters of Martial Universe featuring Yang Yang, Zhang Tian Ai, Wu Chun, and Wang Li Kun. Hmmm…. Not sure how practical these metal armors are when not on the battle field.

=======> ♦ William Chan and Bai Bai He are names attached to novel-to-drama adaptation of Only Side by Side With You (南方有喬木).

=======> ♦ Villain in The Mystic Nine, Harry Yun Ha Hao, is up for Survivor Master/The Tracing Guru (寻人大师) to begin filming in December.

=======> ♦ Zhang Han‘s leading lady for his drama Paris Not in a Good Mood (如果巴黎不快乐) is Kan Qing Zi. Filming began on 12/16. Lol. Finally using a Chinese actress as your leading lady, Hannie?

=======> ♦ Drama Heavy Sweetness Ash-like Frost (香蜜沉沉烬如霜) that has been in planning for three years officially kicks off into gear. Casting begins!

=======> ♦ Adaptation of novel As Blossoms Fade and Fly Across the Sky (花谢花飞花满天) now has a Zhu Yi Long and Viann Zhang Xin Yu listed as their leading stars. Previous rumored to play leads were Peter Ho and Hu Bing Qing. I like the second rumor more. Lol.

=======> ♦ Webdrama The Untouched Crime (无证之罪) based on a novel of the same name written by Chen Zi Jin has a revealed cast in Deng Jia Jia, Qin Hao, and Lu Yao.

=======> ♦ Thai actor Mike D. Angelo and Ju Jing Yi are up for Mr. Swimming (游泳先生). Two swimming-themed dramas. Interesting. A source of confusion for fans in the future for sure. Lol.

=======> ♦ Youth drama, Who is Not A Rebellious Youth (谁的青春不叛逆) has rumored OTP in Alan Meng and Mao Xiao Tong. Yay for Miss Mao!

=======> ♦ Nana Ou Yang and Chen Fei Yu are currently filming a youth movie based on the novel The Secret Fruit (秘果) written by Rao Xue Man.

=======> ♦ Joe Xu Hai Qiao talks about Li Ying during his interview. He says she’s like tomboy, like a model soldier on filming locations. There was one time while filming Hua Qian Gu that she filmed 3 projects at the same time. He felt bad that she worked so hard so he found pretty pictures, one of the beautiful Japan’s cherry blossom and told her to travel there. She replied she will think about it because between filming one project to another, she only had two-days break. Everyone is shocked and the interviewee asks if he had wondered why she works so hard? Joe replies in his own view that actors spend the majority of their time on set, the people on set become their friends during that period, so when they have a day off, they wouldn’t know what to do because this profession also limits their chances of making friends. Because of this, sometimes they feel safer on the set and it’s the same case with Li Ying. The interviewee then wraps up and asks how come he hasn’t fallen for her yet. Lol. Joe: “I…am always encouraging her. *laughs* Interviewee, “Does that mean you’re chasing her?!” He’s thinking and she adds, “The good thing about interviewing a person in the morning is because one can easily get the truth!” After straightening himself, Joe says, “I think… I hope she can find someone who is extremely mature, a person who is not extremely busy to take care of her.” Awwwwwww XD The Hua Qian Gu’s family. [Watch clip here]

=======> ♦ I wrote about this before, but here it is again for those who missed it. Took place at Marie Claire’s event. Yang Mi says she might just be the happiest person and hopes that TY could have 2 kids in 3 years. Lol. Then they ask a typical question, “If you and Luo Jin fell into the water, who would Tang Yan save?”

Yang Mi has the best response. “I think I’d just save him too because I’m a Real Man (her variety show).”

In another interview, she warned Luo Jin to be careful not to hurt TY or else she would beat him up.

Nick clarifies the rumors at today’s press conference for Railroad Tigers (12/22). They are only good friends. She brought along her parents and some staff to visit somewhere in Hubei province (?). Since his parents know the area very well, they acted as hosts for the trip. [Uploaded clip here.]

=======> ♦ Singer Jolin Tsai and model Vivian Dawson broke up (her manager confirmed the news). Eddie Peng topped the search engine. LOL. The Chinese Paladin effect? KEKE. It was said that Jolin dated Eddie back in 2006-2008 but his parents didn’t like her sexy style. Interesting.

=======> ♦ Li Ying as IQIYI VIP representative. Promo stills and clip (with William Chan.) She looks so hot in that TANK!

=======> ♦ Eddie Peng posted a picture of himself in a red suit claiming that now it would be hard for paparazzi to capture him. Li Ying replied with, “Can I order one in black?” On his Instagram account, Eddie Peng thanks Adidas and wrote the hashtag “CanIHavetheBlackOne” Lol. So cute.

=======> ♦ Li Ying is currently in Taiwan filming for The Monkey King 3: The Land of Beauty. She was caught playing games at a festival. Aww. She’s having fun and relaxing!

=======> ♦ Li Ying shooting for Ok Magazine. Here’s a cover and shooting BTS. Will include the rest in friday photoshoots! 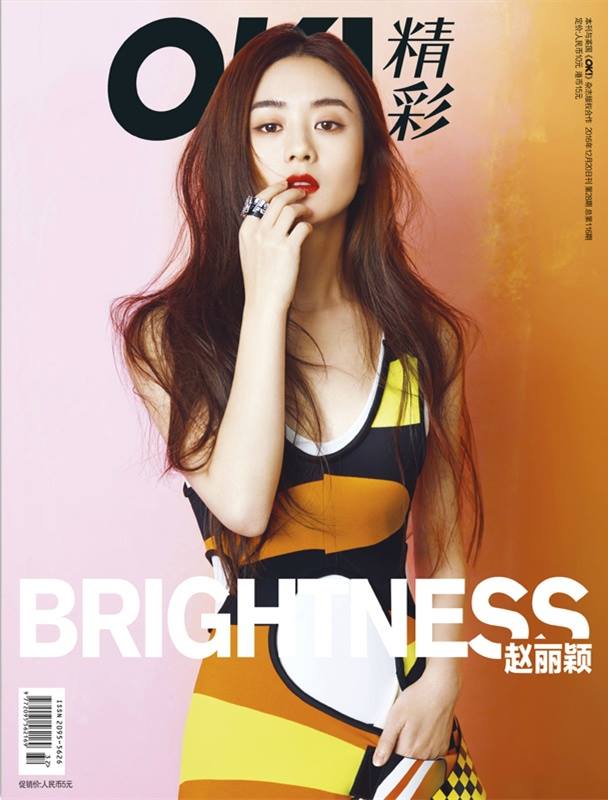 =======> ♦ Yang Yang is rumored to play a special cameo in The Monkey King 3: The Land of Beauty? Fans are guessing the horse disciple aka White Prince. HAH.